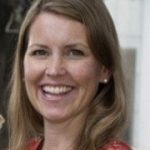 She is, first and foremost, a painter – an abstract painter, fond of acrylic and graphite on paper, or installations of latex on walls.

“At the center of all of my painting is color,” T.S. Kist says. “Forget about all of the nonsense of trying to paint something; I was mostly interested in the color. When I completed a painting, if it didn’t have the palette I wanted, even if it was perfectly representing whatever subject I was painting, I didn’t like it. So that’s why I went abstract.”

As she increasingly incorporates three-dimensional materials – for three years, she has scavenged for pieces of discarded cell phones, wires and other technological artifacts – Kist is careful to honor her painting pedigree. Her mother is a painter, so the medium has surrounded her since infancy. Through college, the younger Kist was a representational painter, focusing on landscapes. In graduate school at Savannah College of Art & Design, she started working with abstractions.

“Painting will always be at the core of my artwork,” she says. “I don’t ever see myself completely disconnecting from painting, but at this point I’m really interested in exploring new material – primarily, getting off of the 2-D surface.”

“It’s opened up so many different options. It’s overwhelming, to some degree. But it’s also exciting. It’s invigorated me, as an artist, in my practice, to start working with different, new materials.”

“TerraStories,” the 2012-13 body of work she submitted when applying for the Fellowship, loosely represents the changes brought on by two major events: Kist and her husband had moved in June 2012 from Georgia to Wilmington; before year’s end, they had twins – a boy and a girl.

“As I adapt to new territories – geographical and figurative,” she says, “I have been processing change through creating abstracted, indistinct stories that capture both the essence of landscape and the assimilation to new local culture – all whilst navigating my way through early motherhood.”

Her first full year in Delaware was busy, and not only at home – Kist, 36, had four solo shows in 2013. They included a large body of work based on the ampersand, “&.” She had been thinking a lot about that symbol, about pairs – mother and father, son and daughter, Georgia and Delaware.

Kist typically begins a piece, she says, “by submitting to paint strokes and pours that are made blindly.” Then she considers more formal compositional elements. She emphasizes “the visual tensions between the deliberate and chance, the mechanical and biomorphic, and the structured and disordered.”

The Fellowship, she says, will go toward materials and will supplement rent for her studio, at the Delaware Contemporary in Wilmington. Kist will show her work in November at DCCA’s Hatch Gallery.