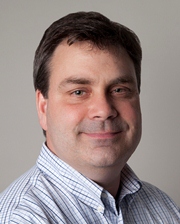 In his photograph titled “Watermelon,” Leon Syfrit arranged on a wooden surface a bunch of purple grapes, a leafy cluster of green mint to its right and, to the right of that, a spoonful of golden honey.

Immediately behind these, looming large and bright and bold with its shades of green and red, is a partially cut watermelon. Plunged into the center of its unintentionally heart-shaped red fruit is a knife. An inch or so of the blade is visible, and the smooth black handle extends to the top left of the frame, set against a backdrop of darkness.

The still-life image, like others in the series that earned Syfrit a Fellowship, resembles an ultrarealistic painting.

He was inspired by Dutch and Flemish paintings of the 16th and 17th centuries – the way the masters “arranged objects and utilized light to create appealing pictures,” he says, “sparked my initial curiosity.”

In time, he realized he wanted to make photographs that acknowledged his awareness of such Old World images. Syfrit’s father was a chef. Many still-life paintings, Syfrit notes, depict food. He felt drawn to the subject matter.

“I think my personality is geared more towards studio work in terms of setting up still-life material and having fun puttering around the studio that way,” Syfrit says, “rather than being out on a commercial shoot, which is also something I occasionally do.”

He speaks of photography as “painting with light.”

“Painting and photography are very similar,” says Syfrit, of Wilmington. “I come from a background of painting. I had some coffeeshop shows of my paintings. And earlier on, I was a fine art major. So I always had a deep love and appreciation for painting. But I also love photography. Eventually, you choose one. As an artist, you sort of vary between the mediums, even moreso in contemporary times than in the past. I think my interest in painting is something I try to evoke in my imagery.”

Syfrit, an instructor and lecturer in photography at the Delaware College of Art and Design, lately has embarked on work based on portraits. He wants to employ alternative historic photographic processes – he’ll mix the chemicals, he’ll make the light-sensitive emulsion, and he’ll paint the emulsion onto the surface where he wants the image to reside. The cyanotype prints that result will be shown in his October exhibition.