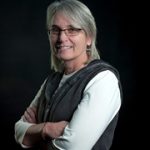 The final piece of what B. Proud calls the biggest photography project of her life, both in volume and in time spent, came in early March. After five years of documenting via images and interviews about 70 lesbian, gay, bisexual and transgender couples in long-term relationships, Proud found herself inside the New York City home of Edie Windsor, considered the Rosa Parks of the LGBTQ community.

Windsor in June 2013 emerged from the U.S. Supreme Court victorious in the landmark case that declared the federal Defense of Marriage Act (DOMA) unconstitutional. She had sued the government for a significant amount of money in estate taxes she had to pay when Thea Spyer, her partner of 44 years and wife of two years, died.

“First Comes Love,” a collection of black-and-white portraits of couples, widows and widowers, began as Proud’s response to the passing of Proposition 8 and other measures during the 2008 presidential election that discriminated against LGBTQ people. Proud and her partner had celebrated their 20th anniversary that October.

Now, five years later, the photographer finally had met Windsor. The widow posed for the camera with a hand on the diamond circle pin her spouse had offered in lieu of the riskier engagement ring when she proposed.

“It was an incredible day,” says Proud, of Wilmington. “I worked really hard to get it to happen. I was turned down by a perimeter of people around her for a long time until I got directly to her and was able to convince her. She loved it.”

Proud shared four hours with Windsor in the West Village, listening to her tell stories. They drank champagne together. Windsor dictated what will be the book’s foreword. When they finished, they were walking down her hallway when Windsor asked, “Are we going to have a party? Are we going to celebrate this?”

Proud, 58, had an offer from a small, independent publisher about a year and a half ago, but she hadn’t yet reached the level of diversity she wanted among her subjects. A mainstream publisher that saw the project liked it but told her it wouldn’t sell. Proud decided to publish the book herself. (The Division’s grant, she says, has helped make that possible.)

By the time she met Windsor in March – they had connected in January, but the 84-year-old Windsor already had a full schedule for the next two months – Proud already had photographed more than 70 couples. Inclusiveness within the LGBTQ community was her goal. The only missing element, she says, was a trans-female couple – she had found one such couple, but a battle with cancer had sapped their availability.

Proud showed 14 of the photographs in January at the William Way Community Center in Philadelphia. She plans to take the project to press in May, with her book’s launch slated for September. The University of the Arts in Philadelphia, where she is an adjunct associate professor, will play host to a launch party.