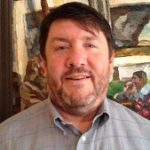 The moment he found oil paint, he says, it was like coming home. The color, the texture, the smell – for Thomas Del Porte, until then a watercolorist, all aspects of oil attracted him.

That was around 2000, after his wife had enrolled him in a class focusing on the medium. Two years later, his mother was facing cancer, and Del Porte began spending nights at her home. He had just left his job. He’d been a headhunter, a staffing manager and had owned a consulting and recruiting firm.

One night, his mom said she wanted to ask him something.

“Tom,” she said, “you’ve always been an artist. What are you doing wasting your time doing any of that other stuff? Go be an artist.”

“It was hard to argue with her,” Del Porte says.

When he went home, he spoke with his wife. She agreed with her mother-in-law’s sentiment. They made the requisite financial adjustments. As his profession, Del Porte would paint with oil.

His paintings “are made with thousands of little jeweled, thorn-like curls,” he says, “each stroke acting as an individual painting.” He paints from direct observation, often outdoors, and at each sitting he notes unique combinations of light, line, color and space.

When Edward Loper Sr., the celebrated Wilmington painter, retired at age 90 from teaching, Del Porte recalls, “he basically went home to die. I was a former student, and that was not going to work for me. So I went over to his house, and I said, ‘Listen, we’re going to go out and paint.’ And we painted side by side for the next five years.”

When Del Porte, 47, was his student, Loper was the critical voice.

“And he did a really great job of being my friend when he stopped being my teacher,” he says. “And we would discuss each other’s paintings.”

Del Porte would tell Loper about something on which he was struggling and would describe a solution he was considering; Loper, gently, might counter with another option. To a lesser extent, Del Porte notes, that exchange of ideas worked in the other direction. The painters had become colleagues.

There was, however, one final lesson.

By then, Loper had moved into an assisted-care home. His former pupil would pick him up and take him to Wawaset Park, a historic community in western Wilmington scribbled with narrow, winding roads beneath canopies of sycamore trees. It’s a wonderful place, Del Porte says, for light, line and space. There, they would spot a vantage point – Eighth Street and Pennsylvania Avenue, he says, was their go-to location – and Del Porte would set up chairs and easels.

One day, just after Del Porte had started painting, Loper told him he no longer could draw.

“I’m done,” Del Porte recalls Loper saying. “Take me back. But before we go, let’s sit down in the car, and let’s talk about your painting.”

Del Porte’s Fellowship exhibition, in September at the Carvel State Office Building in Wilmington, will feature paintings he made of Wilmington landscapes during his excursions with Loper. There will be no explicit mention of that connection, but Del Porte considers it a subtly appropriate tribute.

“I think that for this show, I will go back to Wawaset and experience it without Ed, and do a few more paintings”, he says, “which from an emotional standpoint might be interesting. I don’t know whether that will be hard or not, but I want to have some that are without him, to see how I’ve changed.”

Del Porte has thought about his own ideal setting for exiting this life: “Put the last stroke on the masterpiece” at age 95, he says, “and then they find me there, in front of it, smiling.”