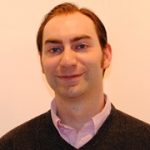 As Dennis Lawson arranged his first collection of short stories, “In the Red,” he noticed a trajectory among his protagonists. With each story, his characters – 20- and 30-somethings who are just beginning to understand the work necessary for romantic relationships to succeed – start from a point of greater maturity. The “emotional bankruptcy” that he says prevails in the collection’s early stories gradually makes way for more positive approaches to relationships.

Lawson counts among his earliest influences Richard Yates, whose stories about crumbling marriages in the 1950s and ’60s “were the first to make me realize that realistic, domestic narratives could be compelling and even exciting.” Frederick Barthelme, too, affected him: Barthelme’s “nervous, passive men and the powerful, aggressive women who spur them to action in the early 1980s” inspire Lawson as he develops characters from his own generation.

Lawson, 34, lives in Newark with his wife, Beth-Ann Ryan, deputy state librarian for Delaware’s Division of Libraries. She reads a lot, and since the days when they first met in college, that has included Lawson’s work. He finds her criticism constructive. She also is a muse of sorts – when Lawson struggles to imagine his readers, he thinks about his wife, “an audience of one.”

When he was working last year on the crime story “Fair Warning,” which would become his first published piece, Beth-Ann’s comments helped him amend its tone. He had planned to submit it to “Rehoboth Beach Reads: The Beach House,” a collection of short stories. She told him the tale seemed too dark; people at the beach want something lighter, she said, something that keeps them moving along.

So Lawson paused, and he decided, “I’m just going to write this to please her.”

“I was trying to write it so that I had this audience of one,” he says, “and I wanted her to like this story. It really helped me start to develop the idea of writing stuff that engages the reader.”

I was down in Rehoboth Beach, at Old Man Dino’s beach house for one of his summertime poker games, when I saw her. She walked into the dining room where a little bar was set up, just as this old tough named Dick Henderson was pouring me a glass of whiskey. She was dressed plainly: black tank top, denim shorts, and black canvas sneakers, but she was as tall and gorgeous as I remembered her. Even more so, with her deep tan and her blond hair all pushed up and off her kissable neck. I recognized her right away—even though she was a brunette when I knew her—but she didn’t seem to notice me. She grabbed the Hendrick’s gin off the bar, mixed a Tom Collins, and walked away with the drink.

Dick noticed me watching her. “You know her?” he asked.

Dick was one of the most dangerous people I knew, so I tried to never give him much.

“She looked familiar for a second.” I took a sip of my drink. Dick’s light blue eyes weren’t easy to meet. “But maybe I was just fantasizing.”

“I’d maybe fantasize about someone else. She’s the boss’s girl while his family is away.”

Lawson had been writing fiction for years during his spare time, and his formal education supported that path – he earned a Master of Arts in English from the University of Delaware in 2004 and a Master of Fine Arts in Creative Writing from Rutgers University at Camden in 2012. Lawson has spent his professional life surrounded by the arts, notably as manager of marketing and public relations for the Delaware Art Museum from 2006-10 and, currently, as executive director of the Newark Arts Alliance.

The latter is a part-time position that allows him to focus more time on his literary craft. It also will provide space for a public reading in April by several authors who contributed to “Rehoboth Beach Reads,” and, later this year, a reading that will feature Lawson and two other 2014 Fellowship winners, Viet Dinh (creative nonfiction) and Jane Miller (poetry).