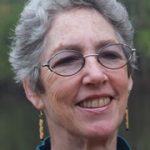 Gabriel Jules considers herself stylistically schizophrenic – her work tends to eschew categories of medium. Most of her images are prints – etchings, monotypes and linocuts are among them – but many are not.

“I realize that many artists make stylistic shifts during their lifetimes,” says Jules, 71, “but they generally do so one incarnation at a time. I, on the other hand, am captivated by different things on a daily basis and appear to be distracted enough to want to translate them all into images of one kind or another.”

The natural universe, she says, “is a high-card draw” among her chosen subjects. That played a part in her selection of a home in Seaford, where the land and its inhabitants provide the inspiration she requires.

“I like being as close to nature as I can get,” the New York native says. “Central Park is lovely, but it really just doesn’t do it.”

Jules and her husband, an organic gardener, converted the large two-car garage into workspace – her studio accounts for three-quarters of it, and he uses the remaining area, mostly for storage.

Both of her parents were artists and teachers. Her father, who painted with oils and created large-scale woodblock prints, chaired the art department at Smith College, and later, at the City College of New York. Her mother, a printmaker who taught art at the Smith College Day School, stopped producing her own art upon marrying Jules’ father, “which I thought was just horrible.”

Jules graduated in 1965 from Sarah Lawrence College, spent part of the next year traveling in Europe and returned to work in the publishing industry. She exhibited her work, mostly drawings, during the 1960s and ’70s. She taught school, worked in market research and was a partner in a picture-framing business.

In 1983, while living in Virginia, she began studying for her juris doctorate at George Mason University School of Law. She passed the bar exam in 1987, and for the next 10 years, she practiced law.

But Jules closed her practice in 1997. It was time, she decided, to return to art. She took classes in drawing and painting at the Corcoran College of Art & Design, in Washington, D.C. She studied printmaking at the Provincetown Art League and the Alexandria Art League.

“We either make choices proactively, or we make the choice not to make a choice, and it gets dumped on us,” she says. “Even when I wasn’t happy with what I was doing, particularly, I always wanted to be aware that it was my choice. It’s like a relationship – some people stay in terrible relationships, from inertia or fear, but you have other choices.

“You either do what’s important to you, or you do that which makes you feel safe. That’s my experience, anyway.”

Jules will show her work throughout November in the Mezzanine Gallery of the Carvel State Office Building, in Wilmington.