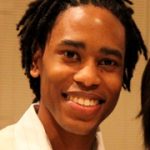 When Matthew Smith and his twin brother, Gregory, were babies, their parents often would have classical music playing nearby.

“I remember just always loving to listen to that sort of thing at night, even beyond just being a baby,” Matthew Smith says. “Probably elementary school, I had a cassette tape I would listen to at night. And I just enjoyed it. I for some reason felt very connected to it. As for the guitar, I think it was just through watching movies, seeing things on television – I just liked the way it sounded. If you were to watch ‘Robin Hood,’ or some medieval thing, they might have a lute or something like that. In those settings, it felt very majestic and powerful, yet soothing at the same time. I connected with its power, with its expressivity.”

When Smith was about 10 years old, his mother gave him a nylon-stringed guitar from Toys ‘R Us for Christmas. He didn’t pick it up again until high school.

It was during the eighth grade that the Smith brothers participated in their school’s bell choir. They didn’t yet know how to read music.

“In eighth grade, we really got thrust into the music,” Matthew says. “And then, freshman year, once that opportunity had presented itself, I pretty much hopped on board.”

His brother’s homeroom teacher was his Spanish teacher. The brothers learned in the course of conversation that one of her degrees was in guitar.

“I had a guitar,” Matthew says. “And so I just asked her, and she said she would do it.”

That first lesson unlocked for Smith a passion for classical guitar.

“I’m kind of like a weird case,” he says. “Mostly, what you’ll hear is that people started playing electric guitar, Led Zeppelin, and then they decide to try classical. But I have only played classical. I think it’s now that I’m out of school, I’m starting to get interested in other areas, particularly jazz.”

Now 27, he is part of the Music School of Delaware’s guitar faculty and is its student and alumni relations officer. Having an administrative job and a faculty role at the same location, he says, “allows me to see the big picture. I feel the faculty are our first line. They’re the ones who are readily interacting with the students.”

His administrative role, meanwhile, allows the Wilmington resident to enhance what teachers can deliver to students. (Students, by the way, have ranged in age from 18 months to more than 80 years.)

Smith will perform in the fall at the Music School of Delaware – check the school’s schedule of events for updates. The Fellowship’s funds, he says, will go toward sheet music, a shorter music stand that will allow his guitar to project into the audience, and additional ways he can amplify the classical guitar.