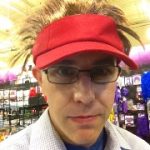 A mere glance at a bird can set into motion Zachary Adams’ imagination. Inside his artist’s mind, the questions arise: Can this be a building block for something new? Can it be something other than what it is?

Can it be more than what his eyes tell him?

“I was never one to read the directions that came with a box of Legos,” says Adams, a sculptor who works with ceramics. “I had to see what I could do with them myself, and find out where they could lead me.”

“In my eyes, everything is not always as it first appears. A bird collecting worms becomes more than just that; it evokes form, mass, line, rhythm, a dinosaur, a hood ornament.”

And each of Adams’ pieces become more than whatever might have inspired its creation – he likes to present to viewers a “cacophonous accumulation of disparate objects,” he says, “and a tension between the dissolved subject and the trace unfolding of a new level of imagery.”

Adams was born in Milford and raised in Frederica. He slowly moved north and west before returning to Dover, where he is an assistant professor of art at Wesley College.

As an undergraduate student at the University of Delaware, Adams’ work-study program led him to serve as a janitor for all of the art studios. His bachelor of fine arts in ceramic and sculpture, a shift from his initial interest in biology, was balanced by a job that had him cleaning up after his friends.

Years of work in coffee shops followed – he did whatever it took to pay for college and survive. He earned his master’s degree in fine arts in 2003 at Indiana University at Bloomington.

Fragmentation is an element of Adams’ work, he says, but in such a piece, he tries to integrate the fragments as a solid entity. He wants them to tell a story within a new matrix.

“I do not try to impose narrative upon this work,” Adams says, “though the interaction of the fragments raises questions and suggests a story. This is a story that can change as different characters – fragments – are brought into play.”

“I offer this combinative play to the viewer, to interpret through his or her own experience and memory.”