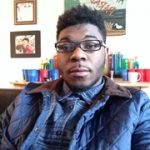 The young woman sits naked on a street corner, her legs crossed above the knees. To her left, empty bottles of Moët champagne and a 40-ounce malt liquor. To her right, another empty bottle. A few 10- and 20-dollar bills are strewn about her. Her face is obscured by a gas mask she’s holding with her right hand. Emerging from the breathing apparatus is a bong, from which a ribbon of smoke is rising.

The only color in this drawing, which its creator Guy Miller, Jr. calls “Even in the Street,” comes with the green of the cash and the copper of the bottle labels and of the fabric or paper on which the woman is sitting.

This was the first drawing Miller made for the collection that earned him a fellowship with the Division. It’s also his favorite of the bunch, and the piece for which he’s heard the most compliments.

“This is when I first started thinking about the roles that women play in the society, what they’re supposed to do and what they’re not supposed to do,” Miller says. “Everything in the picture is a vice of life, things we’re not supposed to be doing. She’s doing it blatantly, in the street. She’s just out in public, and anybody could be walking past. It’s not really a direct message, but illuminating the fact that we put all these restraints on people, women and men, but these things are still taking place, all the while.”

His creation of art, Miller says, has a therapeutic effect on his life. And with the series he submitted, in particular, his attention to the visual message has become as important to him as his time spent crafting the images.

“This collection has truly served as an explanatory process,” says Miller, 22, “as I delved into uncharted areas and left my comfort zone in terms of subject matter.”

Society’s expectations of women form the thread that ties these pieces. With them, he dips into social standards for women’s sexuality, nudity and drug use. Often, the references are subtle – a series of drawings of two women depicts them as physically close and suggests that they care deeply about each other, but their relationship isn’t clear, leading the viewer to project assumptions.

Five drawings center on the Biblical story of Adam and Eve.

“I kind of wanted to go through time,” says Miller, of New Castle. “That would be the earliest incident of defiance that I could think of. I wanted to retell the story of Adam and Eve through that perspective, focusing on the defiant act, actually eating the fruit.”

In one such image, Eve is sitting on the grass near a crooked, barren tree. It’s raining. Several manmade pyramids dot the landscape in the distance. Eve’s nude back is facing the viewer. On the grass immediately to her left is a slice of apple and a knife. The piece, though dominated by white space, depicts a dark scene. It includes two bits of color – red, as the skin of the apple and Eve’s panties.

Though lately Miller has grown fond of India ink, he typically draws with graphite. Small inclusions of color are rendered with markers, colored pencils, gold-leafing pens or watercolor.

Miller bases most of his drawings on photographs he makes. Some pieces, including those in the series about the two women, were inspired by photos made by friends. When he staged and photographed scenes for his submission to the Division, Miller had to borrow a friend’s camera; thanks to the fellowship grant, he was able to buy a camera of his own.