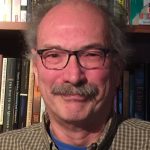 When he worked as a research scientist on new products for the Eastman Kodak Company in Rochester, N.Y., Larry Kelts’ laboratory work included watching how organic and inorganic molecules interacted. He was interested in how well the materials bonded.

Ultimately, one such solution was used in coatings on films. But a look at Kelts’ poetry, which has proved to be his passion since he took an early retirement in 1998, reveals a similar melding of the organic with the inorganic.

Three or four years ago, Kelts started working on a long poem he calls “Lost in the Lewis & Clark Water Park.” It’s inspired by the westward expedition, from May 1804 to September 1806, of Meriwether Lewis and William Clark. The poem includes segments that play off each other, shifting from the expedition to present-day life. Kelts imagines the explorers’ path as a water park — Americans, he says, increasingly learn about subjects at theme parks — and he uses it to “explore time and mind with new metaphors that present tourists on vacation” rather than pilgrims on a pilgrimage.

“These tourists, some turned re-enactors, lose themselves in the roles they create,” he says. “I intend to explore many postmodern concepts. For example, the horizontal propagation of the past instead of the vertical ‘digging up’ of what happened.”

There is no poetry in Lewis and Clark’s journals, but Kelts already has written more than 200 pages inspired by their documented experience. They’re in various stages of completion, and he still doesn’t know when he’ll stop.

His style is rather formal, though he has no favorite. “I play around with form a lot,” says Kelts, of Newark. “In fact, I kind of have as a goal, in this Lewis and Clark poem, to get as many forms as possible, if not all forms, in there, one way or the other.”

Kelts, 68, works best in the morning. He writes everything longhand, then revises on a computer in his study, which is lined with books, to which he often turns for inspiration.

“Literature is a lifelong interest,” he says. “Writing literature is relatively new. That started toward the end of my scientific career and the beginning of my retirement. But I’ve always read.

“And as I see Kodak going down, I say, I’m going to have an opportunity here to retire and write. I thought I would write a novel. And in fact, I started writing prose. But I had a hard time working and writing prose because I couldn’t keep such large chunks of stuff in my mind at once. And so I started working on some poems, which were shorter and easier, didn’t have to keep in my mind as long.

“The high I got from writing poetry was, wow, it was just so great that I couldn’t go back. And it’s still there. I’m never happier than when I’m working.”

I stand in line with my promise in cash,
while Jefferson uncorks a bottle of Bordeaux.
What Congress can’t sell they bury in a cache,
or package with reappearing buffalo.

Upon retiring, Kelts earned an MFA from Bennington College and began writing and revising lyric and narrative poems. He doesn’t think about the reader.

“It’s not something I try to avoid,” he says. “I think more about myself — writing this poem and having it be something that I’m satisfied with. I can’t imagine writing, thinking, What group will this appeal to?”

Kelts sees history as if it changes the way memories change over time. That’s driven his approach to the subject of Lewis and Clark.

“The only definitive history we’ve got of Lewis and Clark is from these journals,” he says. “What they said might not always have been exactly what happened. … The history that people see in this park is maybe how we view it now, but maybe not how it really was. By blending these two somehow, can we get at how we view history and how memory works?”

Kelts always has something in mind for his next project. “The story of Faust has fascinated me all my life,” he says. He’s written a few related poems, taking a Faust-type character and putting him in modern situations.

He plans to use the fellowship funds for some uninterrupted writing time “and a new laptop to replace my relic.” He and his wife have a tradition of staying at a little cottage in Key West for a month or two. His wife paints, and he writes.