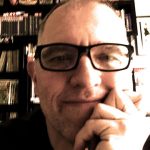 By day, David Yurkovich is a mild-mannered managing editor for a Los Angeles-based company that provides evidence-based clinical decision support to healthcare organizations and clinicians. It’s a steady, remote job, and the work in 12 years hasn’t drastically changed.

Beyond the boundaries of his job, however, he is a man whose passion for creating comic books has yielded self-published projects and a magazine to raise funds for the full-time care of a favorite artist who suffered a life-altering head trauma. And, for the past few years, Yurkovich has donned a somewhat different outfit — that of a novelist, publishing two completed works, with another novel in progress.

“Once you become adept at doing, say, graphic novels or comics,” he says, “it’s hard to wrap your mind around then writing prose, because you’re thinking, How do I tell this story in pictures and a minimal amount of words?”

There are, however, benefits for a writer with an artist’s hand.

“If I’m writing an interior [scene],” Yurkovich says, “I’ll actually sketch it out.”

He already has pictured his cast of characters in his current project, a novel about a stamp collector.

“I’m gonna do some finished drawings of what they look like,” he says, “because that will help me to know who they are, if I can see pictures of them. Versus just saying, ‘Well, he has red hair and he’s 5-feet-2,’ I can really flesh out their looks and their characters. Even if those pictures never end up in the book, it’ll give me something to write about.”

Contrary to what you might think, the pedestrian walkway of the Benjamin Franklin Bridge has never been a popular platform for suicide. Beautiful bridge, great view, but few suicides, perhaps because very few know of the walkway, and fewer still know its access points. Or perhaps it is more practically because that, from a suicide perspective, the distance from the walkway to the Delaware River (less than 42 meters) is not considered a fatal drop. Those seeking a fast and dramatic death fare better in San Francisco where the famous Golden Gate Bridge has played host to more than 1,200 suicides since its 1937 opening.

Inside his home office, his desk is surrounded by books largely comprising pre-1970s science fiction, suspense and horror. He does most of his writing before his work day begins.

Yurkovich, of Milton, began writing in the late 1980s, when he was most interested in comic books and graphic novels. He wrote and illustrated his first comic book, a satirical crime thriller called “Death by Chocolate,” in 1992 and was awarded a grant from the Xeric Foundation. He continued publishing in that vein throughout the 1990s and into the early 2000s.

He self-published in 2007 a magazine called “Mantlo: A Life in Comics.” It was a benefit publication that helped support Bill Mantlo, a comic book writer who worked primarily for Marvel throughout the 1970s and ’80s. Mantlo had suffered severe head trauma in a rollerblading accident in the mid-’80s, and he has required full-time care ever since.

Yurkovich then self-published a 192-page, full-color album: “Altercations: Critical Super-Human Encounters of the 20th Century,” which he says “was pretty much all I had to say about superheroes.”

After that, he shifted his focus to writing prose. Yurkovich has published two novels, “Glass Onion” and “Banana Seat Summer.” The former, he says, is “a suspense novel set largely in the Reagan era and enmeshed with elements of the supernatural.” The latter is “a reflective tale set in the 1970s and centering upon two boys nearing the end of childhood.”

Yurkovich’s wife and fellow writer Dianne Pearce in 2015 convened the Milton Workshop. The group, which has seven or eight active members, meets every two weeks at the couple’s house.

When he started making comics in the early ’90s, he did not imagine each book would “sell like crazy” and earn him “a ton of money.” In fact, most titles simply broke even, selling from 600 to 2,000 copies each.

“But then,” he says, “after a while, I’m like, ‘Well, I’m still doing it. Why am I doing it? I’m losing money, or I’m breaking even at best. Why do I still do it?’ And I think it’s because you just have an idea in your head and you want to get it out. What matters is finishing what you start, because you simply have no other choice.”