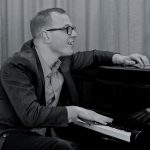 It began as a simple diversion.

Daniel Carunchio, about 10 years old at the time, had seen his father playing their family’s piano, trying his hand at ragtime and Chopin. He’d watched his brother take lessons. Naturally, Carunchio made his way onto the bench and started banging on the piano’s keys.

“It’s not like I was heavily exposed to classical music,” says Carunchio, now 29. “It’s just that there was a piano, and I took lessons, and it was just something I kind of did for a while.”

Before he warmed to the piano, he was drawn to the visual arts. Even after he followed his father’s and brother’s leads, he was more interested in painting and drawing. His aunt would take him to museums.

Then, when he was 14, his aunt took him to a performance of the Philadelphia Orchestra. It was the first time, he says, that he heard “a real, professional orchestra.”

“I remember falling asleep through much of the concert,” Carunchio says. “But I remember hearing this piece, ‘Transfigured Night,’ by Arnold Schoenberg. It’s five movements, and it’s always transforming these themes that are weaving in and out, and it’s just for strings. It’s this gigantic string ensemble, like at least 80 players. And I remember these themes, and they were so gorgeous. They’d weave in and out throughout the piece, and it’s hard to comprehend what you’re hearing because it’s so long, and it’s complex, and it’s hyper-romantic. It’s really dissonant at times, but it’s not like crazy Schoenberg, what he got into later.

“I just remember it being so beautiful. The colors were just amazing. Something just stuck with me.”

A month later, Carunchio was flipping through television channels at 3 a.m. when he saw something familiar on a PBS arts program — a music video of “Transfigured Night.” He heard the last 15 minutes of it, and again he was struck by its beauty. A week later, he bought the CD.

“I just listened to it over, and over, and over again,” says Carunchio, of Wilmington. “I grew to really love it and to identify with certain things in it.”

He was still taking lessons. He was no prodigy, but in hearing “Transfigured Night,” he had found inspiration to stick with the instrument. He started seeking out classical music, listening to samples on Amazon and on CD websites. He bought CDs, and he visited libraries to listen to recordings.

From there, he says, “an immense connection and love, a nonstop discovery began, and then piano was just kind of a way to explore that.”

Back when he was 10, Carunchio attended his first recital and had a similarly powerful epiphany. Someone played Frédéric Chopin’s heroic and military polonaises, and “it was like a revelation,” he says, “something so beautiful. It’s like, I always had known that music.”

He reckons that he had heard his father playing Chopin before that recital, but on that day, the young Carunchio beheld “this gorgeous, perfect world.”

His musical path has been circuitous. He says he was “a terrible student,” and he didn’t consistently practice until he was in his mid-teens. “That’s why I’m studying at 29,” he says. “I’m trying to undo bad habits.”

The Division’s grant will help him continue improving his technique through lessons. The student, meanwhile, makes his living as a private piano teacher and as an adjunct professor at Temple University, where he teaches music theory to non-music majors.

He plans to perform a solo recital in the fall and to include some combination of Schubert, Takemitsu, and, of course, Chopin.