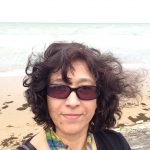 In the years since she earned a Division fellowship in 2012 as an emerging artist, Gitu Barua has added to her writer’s toolbox the roles of researcher and reporter. Her fictional characters often are seeded by tales she grew up hearing, stories of people who, like her family, lived in the Indian valley of Assam, which she calls “a place full of tigers and elephants, ghosts and magicians.”

Barua, who is in her 50s, has written throughout her life, but she has focused on writing fiction during the past 10 to 12 years. She teaches English literature and writing at the University of Delaware.

The rains came out of nowhere that January morning. The little tiger cub, used to sleeping snugly in his den deep in the forest woke up disoriented by the wet and looked around for his mother and sister. He was just old enough to walk about on his own, and not finding his mother anywhere, started out tentatively to search for her.

The Division’s fellowship allows her time away from teaching, during which she hopes to finish a novel that she started a year and a half ago. The novel is based on memories from her childhood, and it’s “filled with fantastic creatures,” she says. She describes it as “the tales from a time when the world was magical, remembered by my character as she journeys up the river Brahmaputra.”

Barua, of Newark, taught two courses during UD’s winter session study abroad in New Delhi. To finish her novel, she is basing herself in India for a few months and traveling the same road the character does — “to make my memories of place sharper,” she says, “and hopefully, to be able to finish my writing uninterrupted by other work.”

Her submission to the Division in 2016 was from a series of detective stories she is finalizing for publication, loosely titled Whistle Stop and Beyond. The fictionalized stories were based on real life cases linked by three main problem-solving characters. “Where earlier, I used only my memories and creativity, now I speak to police and physician friends to include facts in my fiction,” she says. “I find my writing has become more focused and disciplined with this work.”

While in India, she asks people what they remember about newsworthy events that she recalls from years past. Ultimately, pieces from the collective memories of the community will inform Barua’s fiction. But her imagination takes charge when the reporting hits a wall.

“Sometimes the facts themselves don’t reveal people’s backstories,” Barua says. “You don’t know what’s happening with people or their motivations. I think I’ve always thought that way, because I grew up surrounded by stories.”