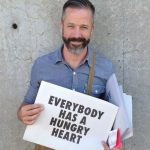 There are times when one object, lit starkly, can embody a monumental event, or even a movement. For most of his career as an artist, Chad States captured such images with a camera. Lately, he is more inclined to create a space in which a person can experience his representation.

Take, for example, “I Feel Love.” The piece, part of States’ submission in earning a Division fellowship, was part of his 2016 installation “Together, We Dream Many Dreams,” which integrated elements of sound, light, video and sculpture.

With “I Feel Love,” a glittering disco ball rotates amid darkness that is pierced by a stream of red light coming from the side and blue light from above. The title references Donna Summers’ disco hit, and States says the installation as a whole alludes to the planetarium of The Saint, the infamous gay New York club. He says he is “exploring the dance club as a space for community and transcendence.”

“While the club served as an entertainment venue,” says States, of Rehoboth Beach, “it was also instrumental in creating a safe space for a burgeoning community of men as the gay rights movement was beginning to take off. These kinds of communal spaces were hard-won and are especially important to honor in the wake of the mass shooting [in June 2016] at the Pulse [nightclub] in Orlando.”

States, 41, was trained in photography, a field in which he’s earned Division fellowships as both an emerging and an established artist. Recently, his work has become based more on objects and on installations, categorized as sculpture. He works a range of jobs — teaching, stage management and bartending, for example — to make ends meet.

He hopes, through his fusion of artistic disciplines, to create environments that seduce viewers, that leads them to feel lost in their minds and bodies.

“I want to transport the viewer out of the typical white-cube experience by providing an all-encompassing theatrical space,” he says. “Music, lights, video, sculptural objects are all used in to create a mise en scène where the viewer becomes an active rather than passive participant.”

States is working on making castings of his head to form a floor tableau that he hopes to have completed in time for the fellowship show in Dover in August. The Division’s grant has helped him to buy materials so he can experiment with forms and ideas without feeling anxious about results.