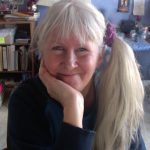 For a while, Kathy Maas attended a monthly writer’s group that met at Panera Bread to casually discuss the craft. It wasn’t a workshop. The object wasn’t to critique or even to share one’s writing. Still, she felt some self-imposed pressure.

“I started to realize that I hadn’t written anything in the longest time,” says Maas, of Hockessin. “A few of the writers were saying how stories just pour out of them and they don’t have enough time in their days to write them all down. I just felt that I can’t be attending these meetings anymore until I start creating.”

She stopped going to them — for a long time. Then, in January, she returned, having written enough recently to feel more comfortable discussing writing.

When she applied for a Division fellowship, Maas submitted essays that included character sketches and reflections on “everyday stuff.” She loves to observe and analyze “the nano” in people. She describes herself as shy and particularly sensitive.

“I’m very in tune with the tiny nuances of human interaction, and I think that’s where a lot of my writing springs from.”

She says she leads a relatively uneventful life, so when she experiences something that moves her, she jots down the most relevant details. The notes then sit untouched until she figures out the angle of her approach. And then it happens.

“It’ll just be a time when I feel it inside of me and it’s ready to come out,” Maas says, “and I’ll pretty much write the whole thing. I don’t know where it comes from, and I wish it would come much more often.”

The monkey people had arrived. My sister-in-law ushered them into the living room and they quietly proceeded to set up. Two large cages contained the creatures. All the kids were summoned from downstairs and everyone crowded around in a semi-circle…

She had written a few things since college — she worked for an advertising agency and for a bank doing advertising copywriting — but Maas started writing personal essays when her mother died of cancer 11 years ago.

“It was such a painful time,” she says, “and I didn’t know what else to do but pour out my heartache via writing.”

She took an online course in creative nonfiction. On the third assignment, the teacher returned her essay, unedited, in a group email, saying that Maas had insulted her by submitting a fiction piece. The piece was nonfiction.

“I think some popular writers take more of a creative license to fill in the blanks,” Maas says. “I read many memoirs with pages of dialogue from when they were 5 years old. And I think, how could anybody remember all that? They must be making some of it up. So I’m really careful with that. I haven’t put my work out there much at all. I think a lot about how my writing will affect people I care about.”

She is planning to give a public reading in the fall, and would like to follow that up with a selection of reading culled from entries by the public on the theme of “What’s So Funny About Anger?” If the logistics work out, the event might travel to each of Delaware’s three counties in a fashion similar to “The Moth.”