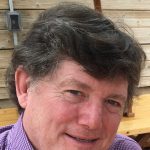 All that Hugh Phibbs has to do in preparation for painting flowers most days in the spring is walk out to his Ardentown yard and collect his subjects. The previous holder of his leased land, he says, planted “a trillion” flowers. His models are perennially reborn.

Phibbs as a child loved to paint flowers, and he never quite got over it. He practices in various media, but his favorite is watercolor. Whether peering at a freshly plucked specimen or representing it on paper, he likes examining how the movement of water plays a part in creation.

“The flowers always have certain patterns that are really an expression of capillary action,” Phibbs says. “They’re branching out, they’re doing all these things that all have to do with the way that water moves through the venous structure of the plant.”

That botanical context informs his method of applying water and pigment to paper.

“I imagine that there’s a tulip,” he says by way of example, “and so I may put water down in the shape of the cup of the tulip, put it down very lightly, and then allow heavier paint to go in at the bottom — say, pink at the bottom and pale at the top — and allow it to disperse, but only in the area that I’ve outlined with the water. It’s a kind of cross conversation between myself and the world.

“It’s not like there’s no control, but if I were sitting making little strokes, trying to make this gradient between strong color and weak by myself, it would be nowhere near as beautiful as the water is gonna do on its own.”

Phibbs has studied and worked in paper preservation for nearly four decades, first as a commercial framer in Washington, D.C., and then for 35 years in the conservation division of the National Gallery of Art. His wife, a choreographer, taught him to let the world partake in the process — she will come up with a concept and give it to dancers, who will improvise like jazz musicians.

Phibbs learned to let go of artistic control by staring at the works of Arshile Gorky, the Armenian-American artist he considers his guru. In Gorky’s latter phase, Phibbs says, he made paintings in which he allowed oil paints to run. (Lately, Phibbs has been applying oils atop acrylic paintings on watercolor paper.)

“My whole professional career was taking care of paper,” Phibbs says. “And so, I was therefore committed in my mind to not working on paper — you see all the problems and the maintenance. But I realized that watercolor paper is so full of glue that it’s pretty durable stuff.”

Throughout his time at the National Gallery, Phibbs seized on his access to paintings by artists including Winslow Homer, John Marin and Mark Rothko. He would look at their pieces, and he would think, “They understand that the water has to do the work.” He filed away such observations for a time when he would return to painting.

“I am a real outlier,” Phibbs says, “in that my physician father always wanted me to be an artist. Every child has to rebel against their parents’ ambitions. My rebellion took the form of, instead of going out and trying to peddle art, I went off and had a career in a museum in various venues around the world, working on preserving art, rather than making it. But all the while, I was still working on making art, and yet there was always something in the back of my head that said, ‘When he’s gone, it’s gonna be my turn.’”

“I know it sounds a bit ghoulish,” Phibbs says, “but I suddenly had this sense of liberation. I went back and started taking pieces that I had tried to finish, and they all started getting finished.

“Suddenly I was not doing his bidding, I was doing my bidding. Nothing changed completely and appreciably, but I began to see possibilities for things that I had been working on going back quite some time.”