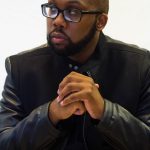 Every day that Aaron Wright gets out of bed is a day that, had something gone differently during his childhood, might not have come to pass. The African American elementary and high school students he leads onstage might not have seen themselves in theaters, let alone facing an audience, acting out stories that are relevant to urban youth.

Wright was born with meningitis and a cleft palate. He was born with just one kidney, though he didn’t learn that until he was 12. He had open-heart surgery at 5 years old, and doctors said he had a 50 percent chance of surviving. At about 7, he had two detached retinas fixed. He also overcame troubles with his hearing.

“I watched how, as a child, people helped me, and nurtured me, and cultivated me,” says Wright, 31. “My mom always instilled in me that you have to give, and I think in my profession, in my writing, I can’t help but give, because that’s what I’ve always been called to do.”

Now the owner and executive director The Wright Decision Production Company and Stage 302, he earned a Division fellowship for his work with what he calls teen stage plays. They are his response to his experience as a member of his high school’s drama department, which produced plays that didn’t speak to his reality. Wright aims to fill that void for teens today.

“I know my life is full of purpose,” he says. “Had I not been here, I look at how many kids would not have continued on, how many people’s lives I would not have been able to affect.

“I’m blessed to be a blessing.”

Ericka is seated on a park bench waiting for Brandon to show up.

Brandon: (from behind her) So this is how it is now? I gotta meet you at a park, tho? Ericka: This is not how it is…its how you’ve made it.
Brandon: Look, if you tryna argue with me again, then I’m out.

Ericka: Well then bye boy…I mean for the last year or so, you’ve been real good at that anyway.

Brandon: (getting closer to her) What’s your problem with me, man?

Wright, of Newark, uses Stage 302 to produce inspirational plays for adults — since September 2016, he has put on a dinner theater show every third weekend of the month at the Center for Creative Arts — but he continues to help young students to explore plays relevant to their lives.

Rehearsals start in May for “How to Handle a Bully,” a hip-hop musical (Wright’s first) that he hopes to stage in September, most likely at William Penn High School, his alma mater. It will star actors from the fourth grade through high school, and Wright intends to invite vendors from school districts, counseling and tutoring services, and other extracurricular activities.