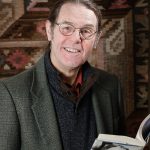 Occasionally, during Phillip Bannowsky’s 31 years working at Chrysler’s assembly plant in Newark, he was able to read while working on the line. The jobs there would alternately wear out workers or bore them dreadfully. When he had worked ahead in a couple of tasks, Bannowsky was able to collect pockets of 20 to 40 seconds during which he could read enough of a paragraph to absorb its essence. He could keep this up for a couple of hours a day. It was how, over a few months, he read “War and Peace,” Leo Tolstoy’s literary behemoth, and Herman Melville’s “Moby Dick.”

Born to a U.S. Navy family, Bannowsky, now 72, grew up in a dozen locales, from Hawaii to France, and settled in Delaware in 1962. All of it has informed his lifetime of writing, be it in a novel, an essay or a poem.

“I don’t know if I’m the best writer around, but I have something to say,” Bannowsky says. “I see some things that need to be said, and nobody else is saying it, so I’ve got to do it.”

In earning a Division fellowship, he submitted “Jacobo the Turko,” which he calls a “novel in poetic vignettes.” He started writing it in 2007. It started out as a novel, but he soon asked himself, “Are you a novelist, or are you a poet?”

His choices of structure — Bannowsky refers to “that potpourri of forms” — are based largely on pace and rhythm and, when appropriate, on the content within the given poem.

Work in the USA During the Summer Months!
Improve your English! Gain Work Experience!
Meet people from all over the world!

He’s been writing poems since the fifth grade, and in 1963 he won the Academy of American Poets prize in a contest judged by the late Robert Lowell. He subsequently dropped out of college, got married and began working at Chrysler. (During his three decades at the plant, he took one extended leave to finish college and teach in Ecuador.)

He teaches composition at the University of Delaware. In the fall, he’ll teach a class about the poetry of empowerment, a service learning course in which students will collaborate with the community beyond campus to produce “empowering poetic celebrations.”

Bannowsky has written news and feature articles, poetry and stories for a range of publications. He also wrote columns in the late 2000s for The News Journal as a member of its Community Advisory Board — he specialized in labor, civil rights, Latin America, the Middle East and the arts.

Those subjects also inform his poetry, which Bannowsky says often falls into what the late poet Thomas McGraw referred to as tactical and strategic categories.

“The tactical,” Bannowsky says, “is engaged in a momentary struggle, can be apprehended on the fly, and often carries a time stamp. In 2011, I handled public relations for Occupy Delaware and wrote a couple tactical poems to hail and encourage the movement. The strategic deals more with the sweep of history, is crafted more contemplatively, and may deal with strictly personal and spiritual matters.”

He considers “Jacobo” a strategic project. It concerns, he says, “an Ecuadorian of indigenous and Lebanese parentage who escapes to the U.S. melting pot only to be deported to Lebanon (where he has never been), just in time for the 2006 Hezbollah-Israeli war. Eventually, he is dispatched to Guantanamo prison.”

Its 2,700 lines, in 43 blended genre poems, comprise characters including an American commando, a Jewish refugee who founds an artisan shop in Ecuador, an African American artist, his teenage ward, a Gujarati shop keeper, a Palestinian exile, a Lebanese laundry owner, a youthful Taliban, and Jacobo’s parents, all “swept in the roiled currents of our time,” Bannowsky says, “seeking fortune, fleeing peril, or taken in bondage.”

“In some ways,” he says, “‘Jacobo’ recapitulates experiences I had teaching English in Lebanon from 2002 to 2004, as well as insights extracted from Ecuador, Delaware, Chrysler, and growing up itinerant.”

The fellowship, Bannowsky says, will free him to polish “Jacobo,” to prepare it for publication, and to broaden his role as a poet and educator.