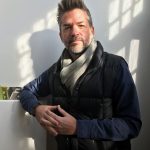 He was trained as a painter, and he still considers drawing to be the foundation of his approach to art, but Troy Richards sees technology as a friend of his projects.

He and a collaborator have worked for more than two years on creating a 5-minute interactive virtual-reality experience.

He and a game designer concocted a video game that could be played just once.

“When you died, you died,” says Richards, 47. “You had no special powers. There were 300 people who populated the game world, and once they all died, the game ended. And it never continued again. The idea was, Could a video game be a happening?”

He’ll explore a medium that intrigues him, and for the three or four months during which he develops that project, he won’t paint.

“Once that project’s complete,” says Richards, of Wilmington, “I tend to find myself back in the studio, working on a painting. I find that it tends to help me cleanse the palette, clear my head. It poses all new challenges, new problems. And then I can go back to other projects after making some paintings, and while I’m working on those projects I tend to be thinking a bit about the challenges of painting. So they’re very mingled, I suppose, for me.

“I don’t prioritize one thing over another as much as I think of them all as possibilities. This idea is one that really demands technology and a collaborator or a team of people to realize, then that’s what I do. And some things, like painting, it’s more intimate.”

In earning a Division fellowship, Richards submitted oil-on-canvas paintings from a series that at first glance seems to feature still-lifes of flowers. The images, however, are built from a collection of clip art flowers and vases — they are, in effect, representations of representations. And to render them, he made and modified a Computer Numerically Controlled router, often used for woodworking and sometimes for cutting metal.

“I built this machine, and I attached a paintbrush to it.,” he says. “And I was able to program some fairly complex paths. I would draw the composition out, and I would translate that to the code for the machine. I would lay down the paint, but the brush would put down the brush strokes and create a path, really, fill in the colors.”

When a piece requires the time-consuming repetition of horizontal or vertical brush strokes, he’ll summon the machine. Afterward, he might use a palette knife to scrape off any excess paint. He might apply more paint with a brush.

“It’s really a back-and-forth,” he says, “between myself and the machine. The machine will usually be reliable, but the material sometimes will just do what it wants to do.”

Richards doesn’t fear that artists will be replaced by artificially intelligent machines. But he doesn’t doubt that such technology will force people to consider the artistic process.

“I think this is why you want to have a range of possibilities for yourself as an artist,” he says. “There are things that will very well be automated, that computers, through [artificial intelligence], through hardware, will do for us. They can generate beautiful objects and fantastic art, and at that point you’re really thinking about yourself as the artist as the person who conceives the work.”

That’s not so different, he says, from the traditional artist’s workshop, the atelier.

“I could be Rembrandt and have eight people working under me who are painting everything other than the eyes or the hair or whatever,” he says. “I don’t look at this as that different from what artists have done for centuries.

If Richards seems to move freely among artistic genres and media, if it seems difficult to pin to him an all-encompassing label, that’s by design.

“The one sure way to feel cynical about what you’re doing in this field,” he says, “is to say, ‘This is my thing,’ to develop a product line as an artist, and say, ‘OK, I paint portraits in this style.’ And then you realize you have to make those endlessly to appease the market. That’s depressing to me. I wanted to give myself the freedom to do what I wanted to do, to pursue an idea. So I thought there was no such thing as a truly avant-garde art, but maybe the thing you can do as an artist is just elude capture. Just don’t let them peg you as this thing. I think capitalism hates that.”

One of the reasons Richards, an associate professor of art at the University of Delaware, recently took on the role of associate dean of the arts was to see if he could use the university system, which he says is the country’s largest patron of the arts, as another tool for creation.

“Can I look at systems in the same way I’ve been looking at technology?” he asks. “It’s another steep learning curve, and I have to dive in.”