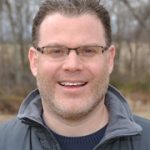 He remembers the thunderstorm. A winter of heavy snowfalls and harsh winds had digested much of the roof and siding of the dying wooden barn at 2335 McCoy Road, in Bear, and Bill Wolff, who had been documenting the structure for more than two years, wanted to capture the visual drama of its bones exposed to the fury of a mid-May storm.

He drove to the site, just across the street from a development of freshly built homes, and hunkered in the car’s hatchback with his Polaroid 250 Land Camera. He waited. Inside the camera was expired Polaroid 100 Chocolate Giambarba peel-apart film, whose discontinuation has sent the price for a pack of 10 on eBay to about $75.

Wolff, who lives not far from the curious barn, made a photograph called “Afternoon Storm.” It appears as if it might have been made before even Polaroid existed – a sepia-like tint renders hazy the driving rain, and the barn’s long planks of wood seem saturated, soggy, ready to fold into themselves.

Two days later, the barn was razed. Wolff’s photograph, made in 2011, serves as one of its final portraits. He had made more than 1,000 digital photos of the barn and its grounds, but to absorb and convey its age, he had created hundreds of analog photos, whose true grains and imperfections, Wolff says, better represented what he felt when standing on the property.

He had used two different Polaroid instant cameras, a Canon AE-1, three Holgas, a Diana F+, a Golden Half, a Kodak Brownie box camera, and a Happi Time 127 camera. They are from his collection of more than 25 cameras, many of them antique.

Wolff’s affinity for analog photography stands in contrast to much of what he teaches as associate professor of writing arts at Rowan University in Glassboro, N.J.
Alongside his courses on visual rhetoric, new media, and the history and technologies of writing, Wolff teaches web design for multiple devices and constantly must be up-to-date on such technology. The goal, he says, is to prepare students to feel comfortable using whatever technologies might be arriving 10, 20 years later.

But every summer, he takes time off from Twitter and its ilk, “just to break away and just be.”

“There’s also the mystery that comes with older films. Digital is so precise that you already know what’s going to happen beforehand, and that’s no fun. There’s a mystery to using a toy camera and you don’t know where the light leaks are coming from, and that makes the technology visible to you. Because if there’s an error in there, then you know something happened.”

He chooses his subjects in part based on the film and camera he’s using.

“I want to try to match what I am photographing,” Wolff says, “with the technologies that I’m using to take the pictures. You’re not just pressing the shutter. You’re trying to coordinate what is happening with what you’re feeling, what you’re seeing and the technology that’s being used to record it.”

One foggy day, he says, he was out for two hours and took two photos. His refrigerated supply of Polaroid 100 Chocolate is limited to about 25 packs of 10 photos each.

“You’ve got to be very deliberate about what you’re photographing,” he says.

The day the barn at 2335 McCoy Road was razed, Wolff set up three tripods. One held a Flip digital video camera, off in the distance. Two others, beside him, held a digital camera and the Polaroid camera.

Two of the most interesting images, he says, were “Anachronism” and “Razed.”