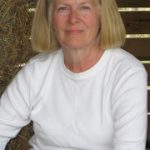 Fleda Brown was the guest speaker at the weekly writer’s group at the Rehoboth Art League, Linda Blaskey remembers. Brown, then the state’s poet laureate, was signing books, and as she and Blaskey chatted, they learned they both were from Arkansas.

Blaskey had been writing short stories since she was in high school and during the years she worked in hospitals. She’d always liked poetry, always had been intrigued by it, but poetry, she says, “always scared me.”

Brown encouraged her fellow former Arkansan, who calls Lincoln home, to try writing a poem. She marked in Blaskey’s copy of her book a few poems that had incorporated Arkansas. Blaskey went home and experimented. Her first poem was about Arkansas.

A Farmer Searches for His Livestock During a Snow Storm

He imagines them huddled
together by now, long

eyelashes rimed with ice.
Their hoof prints blown over,

making them hard to track.
Guernseys and Jerseys.

“I found that I really, really liked it,” Blaskey says. “I liked being able to go right to the core of what I was trying to say, with few words. And listen, when I was writing short stories, I was so into the story and out of it, it was hard for me to push beyond 2,500 words sometimes. So poetry really fit.”

In 2006, the Division awarded her an emerging-artist fellowship in the discipline. She’s the poetry and interview editor of The Broadkill Review. When she’s not writing or editing or reading, Blaskey also teaches dressage lessons.

Her short story “The Haircut” was dramatically presented in 2007 by InterAct Theatre’s Writing Aloud! program in Philadelphia. The Writing Aloud! series, which since has ended, featured dramatic presentations of four short stories by four authors.

Blaskey is a founding member of a writer’s group that since 1999 has met weekly at the Rehoboth Art League, and she was organizer of their Writers Day. She serves on the organizing committee of the annual John Milton Celebration of Poets and Poetry, held in Milton.

During her fellowship year, Blaskey plans to put together a full-length poetry manuscript. Atop the bed of her guest bedroom, the room where she goes to write, is spread an array of Blaskey’s poems.

“A collection of poetry,” she says, “it’s not just random poems. They have to connect in some way. They have to resonate emotionally or on the level of subject. The poems just have to hang together.”

She already has published a chapbook, “Farm” which won the 2008 Dogfish Head Poetry Prize. She’d also like to study with “some top-notch poets,” Blaskey says, “which without the grant I wouldn’t be able to do.”