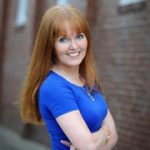 The seed of Anne Colwell’s novel “Holy Day,” which at the onset of spring was in the midst of its second edit, germinated as she pondered women who had been married in the 1950s.

“They sort of made these deals that were like a typical deal of that time,” she says. “And then you had the women’s movement in the ’60s and ’70s, and everything changed, but they had already made their bargain.”

Colwell grew interested in those women. What kinds of bargains did they make?, she wondered. How did that affect their lives?

Colwell, an associate professor of English at the University of Delaware, had heard a story on National Public Radio about people who had been married during the 1960s or ’70s. Its premise, she says, was that “when you hear that one in two marriages ends in divorce, really that was heavily influenced by the people who got married in the ’60s and ’70s.”

“And I thought, ‘What about these women who got married in the ’50s? Did they just stay? Did those marriages last because they were going to last and that was what was going to happen and there was no question?’”

She woke up to the sound of a kitchen chair scraping over the linoleum, and the thump-thump of bare feet as one of the kids climbed up to the cabinet to get the breakfast cereal. The TV was already on and the Looney Tunes music wound itself around her chest and made it hard to breathe. The bed felt like a ship on a hurricane sea. She didn’t open her eyes. She knew better. It hurt to breathe. It hurt to move. It hurt to think. So Maxine lay still and felt her stomach roll with the waves of guilt as she listened to the girls get Petey breakfast. She heard Jenny say, “Sit down, Pete, or you’ll spill your milk,” in a passable imitation of her own mothering tone of voice. She knew Paul was already at work and wondered how he did it. He’d had as much to drink as she had last night, more probably, but he’d gotten up at 6:00, into the gray suit that she’d finally remembered to pick up at the cleaners last Friday, and out the door — no coffee, not even a cigarette. He’d take the morning paper from the front walk and read it on the train to Center City, then he’d walk to the Sun Oil Building. She pictured him whistling a little as he threaded his way through all the gray-suited men in the station.

She reached her hand out and patted the bedside table to see if she could find her cigarettes without having to sit up or open her eyes. The cellophane over the pack of Newports felt slick and cold, almost wet. Her lighter was beside it. Maxine slit her eyes just a little to watch the flame hit the end of the cigarette and she closed them again and lay still a minute or two, listening to the soft clicks her papery lips made against the cigarette, waiting to see if the smoke would calm the shaky feeling so she could begin the day.

The novel “Holy Day” follows Maxine through one day – Dec. 8, 1969. The narrative explores, both in the present and through memories, the struggles Maxine faces as a woman, a wife, a mother and an alcoholic.

Meanwhile, Colwell, who lives in Milton with her husband James Keegan and son Thomas, is in the midst of writing the second of two short stories that she has come to see as being connected. She’s considering creating a series of interconnected tales.

Her plotlines and characters, Colwell says, aren’t prompted directly by her own experiences.

“There’s usually a trigger in my life, but the trigger often doesn’t end up being part of the final story,” she says. “You might say, ‘Well, you have experience with this life because there was alcoholism in your life as a kid.’ But it’s not like the story of my life as a kid, for sure. There’s no character in the novel who’s me, or who’s anyone I know.”

Colwell, who in 2007 was named by the Division an emerging artist in literature for fiction, tends to write either early in the morning or in the evening. She prefers silence.

“If there are any words around me,” she says, “they invade. It’s hard for me to hear the rhythm of the language if there are other rhythms around me.”

The Division’s grant will give her, above all else, time.

“Especially with prose, I need blocks of time,” she says. “I need to spend time living in that world.”

Colwell says she likely will do readings at both the University of Delaware and at a meeting of the Rehoboth Beach Writers’ Guild, with which she is active. For details as they become available, visit the Guild at www.rehobothbeachwritersguild.com.