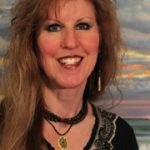 For 22 years, Karin Snoots worked as a technical illustrator. For her corporate employer in Maryland, she created computer-generated flow charts and block diagrams before there were templates, using only her computer’s mouse to render shapes. When the clip art she needed was not available, she would create her own.

“Painting, the fine art, was never part of the plan,” says Snoots, who with her husband Ron moved in 2006 to Harbeson, closer to the ocean for which they feel such passion. “It was always a very personal thing I wanted to pursue.”

Snoots enjoyed her corporate role. But in time, the more personal side of her artistic self, informed by her artist mother and by her desire to be a catalyst for environmental awareness and conservation, expanded.

In 2008, she won an emerging-artist award from the Division for her photorealistic paintings of nature. The crisp details of those images have made way for a presentation that plays with the viewer’s expectations of color, depth and light.

“This style is new to me,” she says. “I just recently embraced this newfound color and more freedom with the brush.”

Snoots tested the public’s reception of her contemporary style in a 2010 solo exhibit at Peninsula Gallery. She asked the former owners if she could include several examples of her latest approach alongside her more recognized traditional style.

“I felt the cohesive color palette would still bring them together,” she says. “Same paints, just used in a different way.”

Both styles were well received. And the exhibit led to gallery representation of her work at Accent Gallery in Ocean City, N.J. Accent, Snoots says, wanted to feature her fresher approach.

“The contemporary style,” she says, “is very close to my core feelings. I am so grateful for my ability to render the beautiful things I see. I make sure to give thanks at the easel before beginning any work.”

She is grateful, too, for the role her husband’s keen eye and constructive criticism plays in her work. (“He’s also my title guy,” she says.)

Meanwhile, Snoots, who also works at The Stepping Stone gallery in Lewes, continues to effect environmental change by way of her art. Her contemporary design of an aquatic scene is featured on a vanity Delaware license plate now available at the Division of Motor Vehicles. Of the one-time fee of $50, the Marine Education, Research and Rehabilitation Institute sees $35.