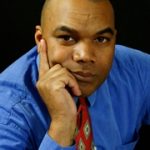 For Andre Jones, to write a play is to deliver common situations in which complex characters make unpredictable decisions.

“Most people, when they approach playwriting, they’ll create complex situations and put regular characters into it,” says Jones, of Wilmington. “I just decided to go the other way. I will build characters whose complexities and subtleties are built into situations that are common for human beings. Because most situations aren’t very deep. People are deep.

Jones is a character-driven playwright, but he is a staunch advocate for plot, which he says hasn’t been strong in a lot of plays written during the past 20 or so years.

“The theatrical value then tends to be that they’ve just done something unusual onstage,” he says. “There’s gratuitous sex onstage, or there’s gratuitous violence, or something of that nature, and that is basically what carries people from Point A to Point B, but there’s really no plot.

“I just believe that you have to give me a reason to care about the character other than the fact that it’s a human being onstage.”

CLARA
Avery gonna be mad.
AVERY
No I won’t.  I promise.
(Silence.)
How did it happen?
(Clara shakes her head.)
Please tell me?
CLARA
I say…
AVERY
You said what?
CLARA
I say I been paintin since I was five.  Say I studied Van gog- Van goo- Van g-
AVERY
Van gogh?
(She nods.)
CLARA
-And I tol him- I say I figured out what was wrong with his strokes.
AVERY
Wait a minute, you told them somethin was wrong with Van gogh’s stroke?  Heh heh.  What happened after that?

Jones, a candidate for a master’s in fine arts at Temple University aiming to graduate by 2015, says he has a flair for the dramatic. He wants his audience to become aware of things that are happening in the neighborhood, or throughout the nation, or throughout the world.

“I want to point it out, make you think about it,” he says. “I’m not concerned with whether you agree with my position. I want you to come away with talking points.”

On April 12 at Brandywine Hundred Library, Jones will do a reading of his play “Exhibited,” about a young woman who was born with autism in the 1950s and triumphs as an artist. He’ll do another reading there in May of his play “Management.”

On June 29 at the Music School of Delaware’s Wilmington campus, Jones will stage his play “Verbalized Ink,” which he describes as “a play-in-verse about a Black family that survives a lot of conflicts within the family. The five-character production centers on a father and his two sons.

For the Wilmington Fringe Festival this fall, he is producing a one-act play called “M,” about a South Philadelphia police detective who is put on a double-murder case. The detective arrives at crime scenes wearing headphones, and each time he finds a clue, he writes hip-hop lines through the eyes of the suspect. Jones hopes to stage a full production of “M” toward the end of the year.

He also recently worked on a script for a television pilot. Set in the present, it follows a man who as a teenage rapper in the 1980s inherited land in Philadelphia. Jones describes the concept as a melding of elements from the popular sitcom “My Wife and Kids,” if it were rendered as a drama, with elements of the prime-time drama “Dallas” and of hip-hop.