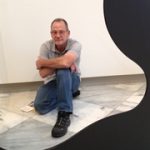 His environment has colored his mind all along, which might be expected for a man born and raised in New Orleans. George Lorio, a sculptor, noticed extremes of “beauty and decay, religion and ritual, custom and iconoclasm.” And each time he has moved to a new region of the country – he now is an associate professor of art at Delaware State University – his work has absorbed and reflected his surroundings.

When his family moved to Florida in his late adolescence, Lorio warmed to what he calls “the sensuous verdure of the semi-tropical landscape.” Through graduate school and a number of residency grants, he and then his young family moved around the state. Lorio’s artwork reflected the natural motifs.

A move to Michigan for a teaching job replaced the lush colors of his palette with the muted shades of a northern winter. Another teaching job took him to North Carolina, where nature again injected color into his work. Then, to a position in South Texas, where his proximity to the Rio Grande brought to his sculptures representations of the shapes and textures of water. By then, however, Lorio’s work encapsulated far more than his physical environs.

“And that’s pretty much where I am now, although I have moved again. I’m dealing with issues beyond the border, beyond just the Hispanic point of view of immigration and things on that order, but those are national issues, not just local issues on the border.”

Fueled in part by the December 2012 mass shooting at Sandy Hook Elementary School in Newtown, Conn., Lorio lately has been working on a series he says deals with the American obsession with the right to bear arms.

“I’m now realizing,” he says, “that I’m pretty much captivated by other issues – gun control is a new one now, after Newtown and what is happening in terms of how we view ourselves as Americans entitled to any type of armament.”

He’s using irony in such pieces and contributed in January to “The Newtown Project: A Call to Arms,” at the Charles Krause/Reporting Fine Art Gallery in Washington, D.C.

“Because they look like toys, I use very bright colors with some of these new pieces,” Lorio says. “Really bright colors that you would associate with Fisher-Price, a manufacturer of very high-end wooden toys, as a way of seducing you visually into looking at this object, which looks like a gun but actually is a set of building blocks.”

At Delaware State, Lorio teaches design, drawing, sculpture and ceramics. His full academic slate has forced him to become adept at scheduling his time well enough to maintain his commitment to a sculptor’s narrative that focuses on a social consciousness.

“I find making objects and transforming objects incredibly satisfying,” he says. “I do like the idea of metaphor, so there’s a visual poetry connected with these things, and a limited sense of color. I don’t see myself as a colorist. I really see myself as working with form, but it’s in service of a narrative. So I’ll use anything provided it services my narrative, and if I can’t find it, then I’ll build it. I’ll make it.”