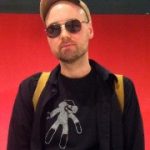 His interests, like himself, move around a lot. Geometry, botany, philosophy, quantum physics. Multistable perception.

Each has inspired the paintings of J. Gordon in some fashion, just as each place he calls home has lent its unique color palette. (Wilmington, during the winter months, fills his mind with images of stones, of grays and browns.)

“I’ve kind of lived all over the United States,” Gordon says. “But I find myself in cities, for the most part, and I’m always very influenced by the textures and surfaces and colors around me. And so, when I’m using oil primer and I’m digging into surfaces and using newsprint or spray-paint, I’m really taking elements out of my immediate environment and rearranging them along certain lines to communicate something.”

Gordon, a curatorial associate at the Delaware Center for the Contemporary Arts, says he took as many sculpture classes as painting classes during his undergraduate years at the University of Kansas. He sought his master’s at the Pennsylvania Academy of the Fine Arts because he wanted to practice traditional painting techniques. The regimen, he says, gave him greater control over how to depict space and how to work with color.

“I’m a contemporary artist,” he says. “I want to approach contemporary subjects using materials that make sense to me. But as an artist I feel it’s important to have, for me, that kind of connection with tradition and history.”

Gordon’s current body of work, he says in his artist statement, “addresses an existential loss of bearings within the contemporary landscape. Informed by the tradition of Western academic painting, the works utilize specific techniques to represent form and space in a way that creates ambiguous figurative relationships that contain multi-stable elements so as to prevent a linear interpretation of the compositions.”

“They are, in a sense, about not knowing what they’re about,” he says. “To be more specific, we can say they address the idea that perception and interpretation are subjective experiences, and that meaning is a construction created by the relationship of the viewer to the viewed rather than being an inherent or objective quality.”

With the Division’s grant, Gordon plans to purchase painting materials and to present his work to a wider audience by covering the expenses associated with exhibiting. He also is considered using a portion of the grant to pay for a class or classes that pertain to his subject matter.

The works he’ll display in his show at the Mezzanine are 2-by-4-feet or 4-by-2-feet and are composed of oil primer, wood stain, spray paint, nails, enamel paint, newsprint, and graphite on shaped and incised wooden panels.