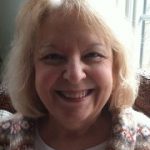 She remembers it well: In 1992, Marjorie Weber was enjoying a gorgeous, peaceful December morning in Princeton, N.J., sipping coffee at her desk. Unbeknownst to her at the time, her parents, driving on U.S. Route 10 in Gratham, N.H., were struck by a car whose driver had lost control rounding a bend.

As Weber considered pouring a second cup of coffee, paramedics were extricating her mother from the buckled vehicle to take her to a hospital. Her father, paralyzed and trapped in the wreckage, watched them take her, thinking she had been killed, blaming himself.

His wife died before reaching the hospital. His daughter, who couldn’t have known what was happening, typed test cases and data validations, part of her work as a technical writer, as EMS workers used the jaws of life to remove her father from the wreckage.

She wrote about the experience in a story called “Context” in 2012: “It surprises me that I had a perfectly fine day, that I had not one gut feeling, not a single stray thought that something could be wrong. The thought still haunts me.”

Who am I if I am not my mother’s daughter anymore, if there is no one in my life who knows I resemble my father around the eyes or that I have my mother’s fine straight hair and the same giggle as my sister? Who am I if there is no one left who knows my family’s stories, my family’s secrets, no one left who shares the same memories I have of who we used to be?

Do I exist only in context?

While I am drinking coffee at my desk in Princeton at 10:35 on a crisp, spectacularly sunny December morning, the driver of a car rounding a bend on Rte. 10 in Gratham, New Hampshire, loses control of his car. My father, in the opposite lane, turns the wheel sharply to the right to take the full brunt of the impact on the driver’s side of the Toyota, away from my mother in the passenger seat.

While I am taking a last sip of coffee and contemplating a second cup, paramedics are extricating my mother from the car for transport to the hospital. My father, paralyzed and trapped in the wreckage, watches, unable to help her, unable to move. She is the love of his life. He thinks she is already gone. He thinks he has killed her. Already he blames himself for what is not his fault.

The story, which was among four she submitted to the Division when she applied for an Individual Artist Fellowship, is evidence of the fresh path Weber has forged of late – she worked for four years as a journalist and spent a couple of years in public relations, but for 25 years, technical writing was her profession. She enjoyed finding ways to express in simple, direct language subjects that otherwise were complex. Structure, for her, was easy to find; with creative nonfiction, she has taken on a new challenge.

“I knew with my mother’s death and my father’s crippling that I wanted to talk about the fact that I didn’t know. That mattered to me. That was important, that I didn’t know, because I always thought I would. I thought I would have a feeling. And this defining moment in my life happened and I was completely surprised. And I think that happens to a lot of people.”

That’s what drives Weber’s creative nonfiction – she looks for stories that resonate, that may be personal but that have a universal theme.

“When I did technical writing,” she says, “the objectives were defined and the content was basically defined. It just was a matter of me working with that content and putting it together in an appealing way, and making sure it was accurate and complete, and for textbooks and user guides, making sure that it was usable. I had business goals in mind.”

Creative nonfiction appeals to her love of writing. She moved in 2003 from New Jersey to Lewes because she wanted to be closer to the beach and, just as important, to the Rehoboth Beach Writers’ Guild.

“I love choosing words,” she says, “that, strung together, are not only visual but add depth, texture and pace to a story by the way they sound and the rhythm they create when they are read.”

The Division’s grant has allowed Weber to take several writing courses at the Writers’ Guild, and she intends to take as many more as she can. She’s focusing on learning techniques that will help her structure her stories.