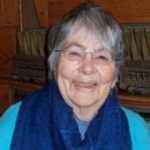 For four or five hours each day through at least September, the Lewes studio of the painter Aina Nergaard-Nammack will resound with the compositions of Beethoven or Bach, of Gounod or Sibelius, of the Spanish composers Isaac Albéniz or Joaquín Rodrigo or Manuel de Falla.

They are among the artists whose contributions to music will inform a series of acrylic paintings Nergaard-Nammack is calling “Fragments of Classical Music.”

She sets her CD player to repeat the particular movement of the particular piece on which she has based her painting. The canvases are square, from 10-by-10 inches through 36-by-36, her favorite. The strokes of her brush start large and are quick, moving with the music, leaving her without time to rinse one color from the bristles in favor of the next. She often finds herself clutching in one hand four brushes of varying size, each coated in a different color.

It is a dance, this carousel of brushes, which suits her well for this project. Nergaard-Nammack likes to move with the music, leaning toward the canvas with each stroke, backing away to absorb its effects on the composition, again leaning in to do what the music is suggesting she do. Her husband once popped in and, catching her as she swayed, said, “Aina, are you dancing?”

She is 82 years old (“with the stamina of a 45 year old,” she notes), and Nergaard-Nammack has been painting from the start. Long before she studied art at Escuela Superior de Bellas Artes in Sevilla, Spain, she watched her mother and grandmother paint big, beautiful copies of the masters. Her mother also painted many portraits and landscapes but, she says, it wasn’t considered proper at the time for a lady to sell her paintings.

Together, they made many trips to small towns in the south of Spain, where during her younger days they’d spend a week at a time recreating on canvas the multitude of little white houses that so captured their minds. Nergaard-Nammack calls the collection of works that grew from those experiences her “White Village Series.”

Her paintings are abstract and non-representational. She imagines forms and colors that convey what she feels while the brush is in her hand; her challenge is to arrange the forms in a strong composition, to reach an equilibrium on canvas.

“I am a messy painter,” Nergaard-Nammack says. Her uniform consists of jeans or the nearest pair of old pants. “They are all filthy. And if I have to go to the corner, I have to change. I go to my friends who have very beautiful, very clean studios; mine is not clean. But that’s the way I work.”

And Nergaard-Nammack works. She doesn’t wait for an enigmatic prompting.

“Don’t believe any artist who tells you that he works when he is inspired,” she says. “That doesn’t work. You work, and then you get inspired. It is hard work. It is fun, but it is hard. … Every day, half an hour – the same thing they tell you about exercise. And if you ruin it, doesn’t matter. Tomorrow, it will be better. You have to have plenty of discipline, in painting like in everything else. It doesn’t come from heaven, you know? You have to produce it yourself.”

She and her husband, an American, married in 1956 and moved to the United States in 1957. They lived for five years in São Paulo, Brazil, in the 1960s, and there she often had solo shows in local galleries (along with two of the couple’s four children). She maintains contacts with galleries in Washington, D.C., another city they have called home, and she continues to exhibit there in solo and juried group shows.

The couple moved to Lewes permanently in 1997. Nergaard-Nammack had decided it was time to leave D.C. She needed her ocean. She looked at a map and noticed that Lewes wasn’t far from Washington, where her children would remain. One weekend, she visited the centuries-old town and bought a house. They used it at first for vacations, but it’s been their home and studio ever since.

Lewes is a walkable town, which is important to the active octogenarian – she practices yoga three times a week, tai chi and walks the beach nearly every day in the winter and summer.

The Division’s grant, she says, will help her upgrade the lighting in her studio. She plans to apply for residency at the Virginia Center for the Creative Arts, has a solo show set for June at Touchstone Gallery in Washington, D.C., and in September will show her work at The Mezzanine Gallery in Wilmington.