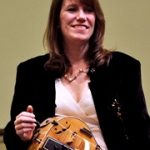 She plays 17 instruments and counting, including the cowbell. Rarely does she play just one at a performance. She sings, from Cajun and traditional Celtic to American contemporary and pop.

“I’ll even adapt pennywhistle to ‘I’m your Venus,” Michele McCann says. “I slam traditions together. I put the most unusual instrumentation into popular songs, to take it to another level.”

But there is one particular instrument, one whose peculiarity extends from its appearance to the sounds it produces to its very name, that has so captured McCann’s fancy that the folk musician has made it her mission to familiarize people with its music and mechanics.

The hurdy-gurdy produces sound by way of a rosined wheel that, when hand-cranked, serves much as a violin bow, rubbing its strings. With the instrument’s keyboard, the player presses small, typically wooden wedges against one or more strings, changing their pitches. One or more drone strings provide a constant pitch, akin to bagpipes.

The hurdy-gurdy originated in the 12th Century in France. McCann, who lives in Newark and is a national award-winning resume writer and a certified coach for job and career transitions through her company, CareerPro, Inc., first was exposed to the instrument at a concert in Delaware in 1982 by a French band called Malicorne. Marie Yacoub was playing the hurdy-gurdy.

“I was just bitten by it,” McCann says. “I already was playing open-mic nights, singing and playing acoustic guitar. And that’s when I met other musicians, and we all had gotten into Celtic music that way.”

Her style is rooted in her days of playing folk music true to its origins. It has evolved, as she composes original tunes and adapts popular songs by artists such as Simon & Garfunkel and Tommy James and the Shondells. McCann has continued to expand into the blues and Americana genres, and she borrows from more modern music to incorporate those themes into the French style.

She’s performed for the French Ambassador to the United States, in direct support of the Delaware Humanities Forum project “W3R: The Washington Rochambeau Revolutionary Route.” She plays for students at Delaware schools and has provided music therapy performances at the Terry Children’s Psychiatric Center for children with social and emotional issues. She’s introduced the hurdy-gurdy to audiences at festivals, street performances and community events.

“I just love bringing this instrument to audiences that have never seen or never heard it,” McCann says, “or, if they saw one, they never saw one that is of this caliber.”

She considers herself an ambassador for the hurdy-gurdy, but that devotion has not come at the cost of other instruments. In music, McCann values versatility above most anything.

“There’s so much joy to share, and there’s so much energy, there needs to be more than one outlet,” she says. “Often, people have no idea what I’m going to pull out to accompany them with. Sometimes, I don’t know until they’re halfway into the tune.

“And then I realize what’s missing, what needs to be added. If I’m not familiar with the actual melody, I’ll add percussion. But when I play with a Cajun zydeco band, we’ll take a popular song like ‘Wooly Bully’ and change it to ‘Hurdy-Gurdy.’

“I want to demonstrate that this instrument with ancient origins can stand on its own, as well as being an integral part of a performing ensemble.”

With the Division’s grant, McCann plans to acquire a quality amplification system to be installed directly onto the hurdy-gurdy, eliminating the need to amplify through a cumbersome external microphone. She also wants to record a CD and to have the hurdy-gurdy maker perform mechanical adjustments to restore the instrument to the highest-quality acoustical performance properties possible.

McCann will be the featured musician on Sept. 14 at a Delaware Division of the Arts event at the Biggs Museum of American Art in Dover.