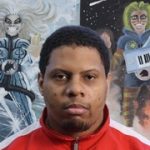 For Knicoma Frederick, the power of creating art is that it grants the ability to express what is difficult to say in words. As a man on the autism spectrum, that is quite a powerful thing, indeed.

Michael Kalmbach, a former Division fellowship recipient, is director of the Creative Vision Factory, a communal art studio for artists on the behavioral health spectrum. Frederick, he says, “is our all-star member.”

“Knicoma is the most prolific artist that I’ve ever been around,” Kalmbach says. “He completed 12 books last year, each containing over 110 original drawings apiece. He’s a machine.”

The Delaware Art Museum bought Frederick’s first book, “80 Bit.” It is part of his ongoing series titled “WPIZ,” meant to assist others in their journeys to self-awareness and enlightenment.

Frederick says the books are like computers that don’t work electricity. He sees them, in other words, as tools that people can use to solve personal problems.

“WPIZ has been made so that all problems, or anything somebody faces, they can solve them from an artistic point of view, where they won’t have to do what they had been doing for many years – drinking, doing drugs, the negative, feeding in, arguments, fist fights, breaking the law,” he says. “WPIZ scratches all that away so that what you go through with WPIZ is all-expenses-paid, so that all you have to do is come to your higher power to get right with him, and live your life accordingly, and have contentment.”

Frederick sees his artwork as interactive, as something that people can turn to when their struggles yield few options.

“People have heard of games like ‘Street Fighter’ and ‘Mortal Combat’ and ‘Tekken’ for PlayStation and XBox and all of those different types of game systems,” Frederick says. “But ‘Art Fighter’” – that, he says, is a system within the WPIZ system of images – “is fighting with artwork. You’re taking artwork and you’re fighting the situation with it. You’re taking a picture that represents what you want to have happen done by the storyline in each book. You’re taking a picture, and you’re destroying the negative with it. You deal with something, and you solve it, but you don’t have to put your hands on anybody to do it.

“I have an obligation to make the WPIZ so that the books are used for overcoming the evil that’s in the people’s way.”

And Kalmbach, who says he simply shone a light on Frederick’s drawings and paintings, has seen the effects of Frederick’s success on other members of the Creative Vision Factory.

“Knicoma’s been getting a lot of recognition for the work, and they definitely see that it’s because he puts in the work,” Kalmbach says. “He’s been an excellent model. I’ll say, ‘This is how you go about creating a creative practice. This is the type of discipline that is necessary.’ And he’s not only serving as a role model for the members here, but I think the greater art community that comes through this space. We’re able to integrate our member artists into the larger art community.”

The WPIZ series of drawings, all on 8½-by-11-inch paper bursting with color, celebrates heroes, not villains.

Says Kalmbach, “It’s been cool to just kind of sit back and watch this epic story unfold.