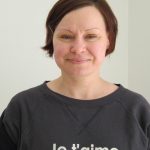 Curiosity brought Žaneta Zubkova to Wilmington from Lithuania in 1997, a trip she meant to last one year. She was 22, a recent graduate of Kauno Aukštesnioji Meno Mokykla, a prestigious art college in Lithuania. She remembers reading a newspaper article soon after her arrival about the opening of the Delaware College of Art and Design, a creative partnership between the Pratt Institute and the Corcoran College of Art and Design.

Thinking it might be fun to try an art school in the United States, Zubkova applied to DCAD and was accepted. Not long after, faculty and DCAD noticed she had a bachelor’s degree and told her she was overqualified for their program. They helped her put together a portfolio and apply for graduate schools. Zubkova chose Brooklyn College, a move that kept her in New York for more than a decade.

There, she was an adjunct professor at Adelphi University, among other institutions, from 2005-14. For years prior to her return to Wilmington, Zubkova split time between New York and Delaware — she had become an adjunct professor at DCAD from 2005-08, and again from 2012 through today. A romantic relationship had kept her tethered to Wilmington, and the commute ultimately proved less enjoyable than a proper move back to the city. She has been a resident for the past year and a half.

Wilmington inspires her still. Urban landscapes provide her with clear geometry, structure that moves her to make images. She has found an unlikely inspiration in the solid, dry concrete walls that surrounded her upon her 1997 arrival. Since then, it has dominated her daily visual and emotional experience.

“I find its spaces, light, and structures inspirational,” she says, “so it is a natural subject for my work.”

“Color is an emotional aspect of painting for me,” she says, “so I take liberties with local color to be expressive. I bring in the collage and line element to emphasize the structure of the orderly landscapes I see.”

Geometry “really excites me,” Zubkova says. The lines and precision in her work “gives me a gentle high.” She claims a very good visual memory and counts observation as her primary sketchbook. In New York, she constantly made small, mental snapshots of the sky and of buildings. From those images, she launches her process of tweaking until she has created what feels right.

She earned her master’s degree in oil painting, but the limitations of her studio space in New York led her to focus on smaller works. She tends to work in series, as she did with her submissions for the Division fellowship, which she finds allows her to more deeply explore a subject. Sizes in such series, rendered on watercolor paper, are 4-by-6 or 4-by-4 or 5-by-5 inches. Zubkova says she’s love to go larger, and to that end she’s considering connecting the pieces of the series into a grid of sorts.

Eighteen years after she arrived in Delaware, she has returned with fresh eyes. “I see how black and white the city is,” she says, noting a sort of racial delineation she didn’t see as much in New York. “I find myself caught between two worlds. I’m white, but I’m an immigrant. Even though I’m happy where I am, I see Greenville and Centreville, and then I see Wilmington, which is just the most desperate place. I want to reflect on that, but not in an obvious way.”

The geometry and lines that happily overwhelmed Zubkova upon her first arrival in Wilmington have made room for her to consider more nuanced aspects of life in Delaware now that she has returned.

“I’d like to find a device to show that,” she says. “And especially since I did get this grant, it would be my way of giving back to the community, and maybe in a very subtle way, share my thoughts.”