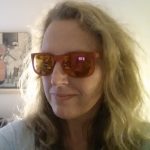 Abby Millager is a freelance promotional copywriter, mainly for healthcare, clinical research and specialty chemicals businesses, but she’s been writing creatively throughout her life. She wrote her first play, a musical farce called “Backstage,” with twin friends in middle school. (“It was sort of like ‘Noises Off,’ 10 years before that was written,” she says. “And nowhere near as good.”) A boy named Digit lost their lone copy of the script.

Most of Millager’s work and training has been in poetry. She earned Division fellowships in 2009 (poetry) and in 2012 (nonfiction). She notes the long tradition of poet/playwrights, which she attributes to the “compression and intensity of poetic language.” That, she says, is exactly what she wants onstage.

“Dramatic speech needs to sound plausible as normal conversation, but it really isn’t,” Millager says. “It’s the way we’d speak if we had a chance to think it all out ahead of time — every line a zinger. In poetry, the unsaid is also critical — what is implied between the lines, metaphor, symbolism and so on — levels of meaning beyond the literal. Not that it’s easy or fail-proof, but I do tend to apply these poetic considerations to my dramatic compositions.”

A play in four acts.
by Abby Millager
ACT I
Scene 1

(Living Room, Krkoschka Palace, Brno, Moravia, spring 1912. Cavernous, sumptuously spare Jugendstil space with high ceilings and translucent white marble walls. Facing the audience, a low, oblong, white suede couch with strategically arranged plum, celadon and salmon appliquéd throw pillows. To the left of the couch, a pair of matching armchairs. Center rear, large double doors open into the partially visible dining room. Inside are a stepladder, drop cloths and a tarp-covered banquet table glimpsed from the side. An important mosaic frieze-in-progress graces the upper dining room walls. To the right of the DR doors, against the rear LR wall, stands a console table. At the left, somewhat downstage, sits a tall, closed, inlaid wood and gold writing desk with a cuboidal “disappearing armchair” stowed underneath.
Centerstage, MARIJE is on her hands and knees, bowl by her side, scrubbing at something on the couch seat.)…

The project she submitted to the Division for this year’s fellowship, a full-length play called “Palais Krkoschka,” had been in gestation since before 2003, when Millager lived in Worcester, Mass. She researched the idea at the Worcester Art Museum library. She knew her play’s setting, Vienna, and characters, which include Gustav Klimt and a main character inspired by some of his paintings. But for a long time, she didn’t know the story.

Her connection to Vienna is longstanding. As a teenager, Millager lived on Sigmund Freud’s old street and periodically passed the Sezession pavilion, “with its globular, gilded crown — the flamboyant flagship of turn-of-the-century Viennese art nouveau.”

She later learned of Palais Stoclet in Brussels, in which every household item, she says, “was painstakingly designed and executed by Viennese artists and artisans.”

“Breathtaking,” she thought, “but how would it feel to live inside a famous work of art, always afraid of messing something up — especially if its creators kept checking in?”

She researched the Stoclet family, but reality became a hindrance, so she renamed the house and moved it to Brno. She repopulated it. Two of her characters — Klimt and Josef Hoffmann, the building’s chief mastermind — are historical. The rest, she says, are drawn to varying extents from images made by Klimt.

The play, in its sixth draft, is ready to enter the development stage. Millager is seeking a venue where she can host a staged reading.

“I’m really excited to see how it comes out,” she says. “You think you know what it’s like, on paper, but the reality will undoubtedly be different. I’m looking forward to seeing how other people — actors, director — interpret what I’ve written.”

Meanwhile, Millager has started writing a new play “poking fun at bleeding-heart liberals, of which I am one, born and bred. … My study floor is currently littered with index-card inspirations, and I wake up some mornings with another piece of the plot puzzle solved.”