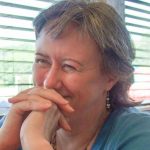 It is one thing to expound the healing powers of poetry — indeed, many an artist of any medium has testified to the psychological benefits that accompany the act of creation. But when Maggie Rowe, of Newark, speaks of such things, she isn’t necessarily referring to herself.

She works as a poetry teacher at the Cancer Support Community of New Castle County, and as a freelance workshop-leader, editor and proofreader. She has taught at the University of Delaware and at the Ferris Juvenile Detention Center. A few years ago, she spoke about the healing powers of poetry across the world, in war zones and hospitals and refugee camps, during the after-dinner address for an Eastern conference of hospital chaplains. She has edited a collection of poems written by Cancer Support Community attendees, “Poems of Shadows and Light.”

Rowe, 61, was raised in the United Kingdom and has lived in Delaware since 1983.

A blunt needle piercing
thick gray felt,
our plane drops through cloud;
below, I see a whale
passing the mouth of the bay
and then what I might expect:
ships, blue and green,
heading for open water,
islands, crops
the first houses.
Once I’m back in America
I must remember that
during my dark hours

and whales swim there
like knees moving under silk.

“I’ve been writing and rewriting my whole life, though I know it’s almost impossible to make a living this way,” she says. “Some things you just have to do. Publishing’s a tough business, but I’ll say to everyone, to all the quiet poets out there, that it’s easier to get your work published if you send it out than if it stays safe in a drawer in your room.”

To that end, Rowe is an active workshopper, even when she’s not leading the room — honest criticism from a group of people who will give you tough feedback, she says, is “a great treasure.”

Most recently, Rowe co-edited the Delaware poets and prose-writers’ anthology, “Currents.” She also is a photographer — her work is on exhibit at Sinclair’s Cafe, on Main Street in Newark, until March 31.

“Poems,” she says, “are like argumentative, insightful friends who live in my house and like a good puzzle. I thought, when I started writing, that in order to be successful I had to shock people, or dazzle them with technical proficiency, or spin a good yarn. What I’ve realized is that a poem can be shocking or dazzling or fascinating, but what makes it memorable is the relationship the poet creates with the reader. What I’m trying to do now when I write is be trustworthy as my reader’s companion, and listen as much as I tell.”

Rowe earned an Emerging Artist fellowship from the Division in 2004. Since then, her chapbook, “Every Mother Moves to a New Country,” has been published by Finishing Line Press; her poems have appeared in numerous anthologies and in national journals including “The Sun,” and “RHINO” magazine.

The Established Artist grant, Rowe says, will enable her to finish her book-length projects. She also hopes to volunteer as a poetry workshop leader at other Delaware sites.