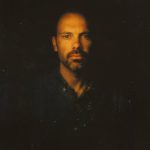 On the vast, wooded grounds of St. Andrew’s School, in Middletown, you might find Joshua Meier wandering the trails traced into its 2,200 acres, much of which is a dedicated nature preserve. He is head of photography at the boarding school, and on its land, which includes tracts leased to farmers and Noxontown Pond near its center, Meier two years ago began documenting the “tiny deaths,” as he puts it, of creatures whose lives have come to an end.

The project, “Ceremonia: Animalia,” whose images he submitted when applying for a fellowship grant from the Division, called on Meier to use a 19th-century process called wet-plate collodion. It demands both patience and urgency — whether using a plate of glass (ambrotype) or of metal (tintype), the photographer has about 10 minutes during which he or she must flow a syrupy gel across a plate, sensitize the coated plate in a silver bath, shoot an image and develop the result. Environmental conditions provide a cache of variables — fluctuations in temperature and humidity affect the image on each plate, as do the levels of acidity or alkalinity in the silver bath. Meier sometimes adds to the bath a bit of sugar or of citric acid, for instance, to make possible what he has envisioned.

Imagine having to tote the trappings of a darkroom to the spot of a photograph’s creation. Imagine, also, producing a nearly instant photo as far back as the 1850s.

Meier chose that process for two reasons: It captures fine details, and it forces him to slow down and connect with his subject. “The chemistry involved changes and evolves, sometimes by the minute, and reacts to its environment almost constantly,” he says. “Like the lives I record, each plate is unique and cannot be duplicated.”

He knows that few of his students, whose first cameras likely were tucked within cell phones, will go on to pursue photography. That’s not his goal.

“My goal,” Meier says, “is really to educate them about all that photography is and all that it can be. So that, when they do go out in the world, and they go to a museum or a gallery, they can look at something and read the label, and they can go, Oh, that’s a salt print, or, That’s a photogravure. And then they have some sort of realization of what that is.”

“On the surface, it’s very easy for a lot of people to look at something that’s in a frame and think it’s digitally printed, or some effect from a filter. Making that distinction between those things that are created on a computer versus the things that are created by somebody’s hand, and knowing how to recognize those, is important to teach a younger generation.”

Meier grew up in Oklahoma; his wife was raised in Montana. In 1996, when he moved to Montana, Meier attended Rocky Mountain School of Photography. Upon graduation, he assisted photographers of various specialties — architecture, fashion and commercial portraiture were among them — and began teaching (or, he says, learning to teach) photography. From the start, Meier knew he wanted to focus his own work on fine art. He has exhibited consistently during the past two decades. Today, he is head of photography at St. Andrew’s School, in Middletown.

Montana has a vastly different landscape than the region of Meier’s youth. Delaware, too, is visually unique to him. He adapts, artistically, to his environment. The images he produces, and the processes by which he creates them, differ based on his location.

“I can’t do the same type of work here” as in Montana or Oklahoma, Meier says, “but I found myself in Delaware, and I’m starting to become attracted to the idea of all the water. There’s water everywhere, and I love some of the visuals I see along the Delaware River and along the coast.”

The grant, Meier says, will go toward a project he calls “ROUTES,” inspired by his passion for bicycling. It merges photography with the GPS tracings that have become commonplace among people who track their athletic endeavors. He’s considering the inclusion of even more data — elevation, heart rate, etc. — and might represent that information by rendering those routes in three dimensions atop the images.

“There’s a tradition in photography where we want to reproduce prints exactly the same over and over and over again, in numbers,” Meier says. “And I reject that in my work. I intentionally look for ways to make each print unique in and of itself. And so I’m interested in processes where there’s a lot of room for happenstance, things in the moment that you can’t predict and you can’t reproduce.

“I like the ambiguous feeling of photographs, the sort of mystery of photographs, not knowing exactly what’s happening. With art in general, it makes for more interesting art. I think if you answer all the questions, it’s an easy read, and I don’t want my work to be an easy read. I want people to sit with it, consider it, feel it.”