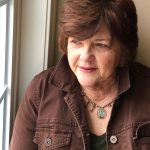 A viewer may see in Diane Lorio’s paintings several layers of dots or dashes or shapes. She builds upon each, over and over, to make a piece robust. She can work quickly, but she always likes to go back.

“The parts of my painting make the whole,” says Lorio, of Dover, “so I’m really interested in that one little color or shape or form, and how it relates to the others, as I move across the painting.”

She speaks of one body made of countless individual cells, of water as the sum of its molecules. Everything, to her, is part of a whole.

“The artists that have made an impact on me are part of who I am as an artist,” she says. “The sugar crystals in a sugar bowl become part of the coffee.”

Lorio, 66, recently returned to painting after many years supporting others in the arts. She created an award-winning high school art program; raised a musician daughter; supported the endeavors of her husband, the sculptor and 2013 Division fellowship recipient George Lorio; was the director of art education at a state-sponsored organization; and, most recently, she worked at VSA Delaware with developmentally challenged individuals by kindling their artistic talents.

The current body of Lorio’s work is pattern-oriented and non-representational in content. The patterning in her art, she says, reflects her interests in tribal cultures, the natural world and science.

Lorio’s artistic journey began soon after she began taking an art class at her high school in Jacksonville, Fla., and went alone to the Museum of Modern Art while visiting her grandmother in Brooklyn at 16. She didn’t immediately grasp the intricacies of what she saw that day, but she noticed all that she liked within each painting.

After that art class, she thought, maybe I can do something.

“I wasn’t good at everything,” Lorio says. “I wasn’t a great mathematician or great at science. So what I did was I just started getting canvases and painting. When I was young, I just painted whatever I saw in front of me. I’d kind of look at it and emulate it.

Years passed before she gained true confidence in her self-identification as an artist. Years, but still fewer than often is the case.

“I was young,” she says. “Thirty-ish. And I was never sure if I was an artist. You know, you go to school, and you play at art, and you love art, and you just wish — all that. And I was doing art. I was selling it, and I was in art shows, and I never owned it. I think the biggest problem with people who are artists is that they don’t own that they are. You have to own the label. Own it.”

Lorio, who moved to Dover six years ago from Brownsville, Tex., certainly has owned the label. The daughter of a handy father, she always has been technically inclined. She can sculpt, draw, work with film and fiber, to name a few. She considers herself an artist before she considers herself a painter, although she’s a painter more often than any other kind of artist.

“Just name who you are, and you can become that,” Lorio says. “You just have to do it.”

Her paintings, mostly on canvas or on paper, can range in size from 3-by-5 inches to 20-by-30. Her van is all that limits her from doing larger pieces. She doesn’t paint by medium, switching from acrylic for basic patterning to oil for details. She always has “crazy music in the background, anything but country — jazz, Latin music, rock.”

Lorio was painting in an abstract expressionist style until she noticed the patterns in quilts that an old crafts woman was making.

“So I started ripping up my art and putting it back together,” she says. “That’s when I started on patterns. Now I paint my patterns.”

The Division’s grant will help Lorio invest in supplies and equipment for her studio. She will focus on making new works as well as matting, framing and crating existing pieces for future shows.