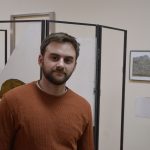 Over the past three years, Phillip Scarpone has pulled bits of inspiration from a variety of spaces — fire escapes on Shipley Street, for example, or the walls of the Wilmington house in which he lives and was raised — and merged aspects of them to create new places or new things.

One such installation, “Sky the Color of Cement,” is the size of a small room and comprises hundreds of steel bars and laminated plys of wood, pinned or welded together, all coated with an oxidizing, metal-infused paint.

Scarpone, 28, spent a couple of months photographing the contraptions, focusing on their folding mechanisms, and “just multiplied that form,” he says. “So those are all folding, modular units that come together to create that space.”

The piece is his reflection on space and production. When Scarpone was 15, he worked in a high-production bakery. He would spend five to eight hours of a shift working on a single task, “pushing my mind into a state of neutrality where thoughts would wander aimlessly,” he says. “I always had a mixed feeling of gloom and content.”

“Sky the Color of Cement” became for him a similar neutral zone. The inspiration for its title emerged from a novel he was reading, Paul Auster’s “Oracle Night.” One particular passage helped Scarpone reflect on his time working in the high-production bakery:

“The sky was the color of cement: gray clouds, gray air, gray drizzle borne along by gray gusts of wind. I have always had a weakness for that kind of weather, and I felt content in the gloom …”

Scarpone is in the midst of a one-year fellowship at the University of Delaware. His studio practice there “drifts through a variety of processes,” he says, “with the interrogation of recollection as a constant. In thinking about how our sense of self is connected to our environment I use personal connections to places, the history of objects and familiar mechanical processes as a starting point in my work. I am interested in how recalling a moment, space or experience, diluting it and filtering it through a mental sieve can create new poetry in what we find important.”

Having grown fond of photography in high school, he has accumulated a lot of reference images of architectural spaces that interest him. Each of his works ultimately is a merging of various interior and exterior elements into one structure.

During graduate school at the University of Georgia’s Lamar Dodd School of Art, Scarpone began to shift his focus to the experiential part of architecture — the qualities of moving through a space. (He finds beauty, for example, in the small, angular space beneath a stairwell.) He researched the brutalist architectural movement and grew fond of heavy, concrete forms, which remain strong factors in his work.

In the end, any architectural elements he includes in a project will have stemmed from a space in which he has worked, lived, explored and become interested. Environment, not pure architecture, is what matters most to him.

Scarpone also works as a fabricator at Amuneal Manufacturing, in Philadelphia. The company builds, among other objects, customized furniture, architectural accents and walls, and store displays for high-end New York City companies. Recently, Scarpone worked on building a staircase for NBC Studios.

The fellowship will financially fuel his studio practice in 2016 and is allowing him to work toward a solo exhibition at the Chris White Gallery in November. The gallery stands across the street from the fire escapes that inspired “Sky the Color of Cement.”