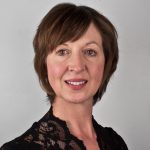 Linda Celestian’s love of water harkens to her childhood, when her father owned a 31-foot Richardson boat. They had a spot on a marina near her grandparents’ summer home. During her father’s annual two-week summer vacation, the family of five — Celestian has two sisters — would trace the Finger Lakes of Central New York on a boat whose dining room table converted into a bed.

That half-dozen years of summers spent afloat, Celestian learned to pay attention to the nature that surrounds her. As a full-time artist (and part-time art teacher) who’s been painting for 30 years, all of her senses inform her work.

Without a brush and “in partnership with the laws of nature,” as she puts it, Celestian pours onto a canvas an airbrush medium — it has the right consistency and integrity, she says, even better than the thinned acrylic paint she also uses — and allows it to run and puddle, forming naturally occurring markings. She draws inspiration from aerial photography, the ocean, lakes of her childhood and the creek in her neighborhood. Pour a layer, let it dry. Another pour, another dry. Layer upon layer, she builds toward the final piece. When she wants frothy waves, she uses a palette knife to flick drops of turpentine at the gathered pigment.

Most recently, she has focused her observations on “the macro and micro worlds of nature” — sunsets, fallen trees, fungus, weeds, and patterns created by wind and rain inspire her choices of color and how she tilts the surface as the paint meanders.

“The laws of physics allow the paint to go where it’s going to go,” says Celestian, of Wilmington. “I can’t always control it. Because a lot of the imagery has to do with water, fluid paint flows the way water would flow. So these images tend to come out looking like things from nature without me even trying that hard.”

Nonetheless, each painting is the sum of multiple layers, each one unique. Some paintings, she says, come together in three or four pours, “and that’s magical.”

The dimensions of her paintings, which she creates in a studio space at her house, range generally from 36-by-36-inches to 30-by-60. When she has puddles of paint drying on a work or two, she turns on a ceiling fan and a couple of additional directional fans.

Celestian, 51, forged her artistic path when she decided her representational art felt static. The concept of “still life” didn’t appeal to her.

Her blue silk sculpture “The Ocean’s Whisper to Me,” meanwhile, was installed at the renovated Park Towne Place Apartments in Philadelphia. Elsewhere, she created a work of fused glass that comprises three sheets, each a separately fired glass painting.

She hopes to get a residency at a facility where she can work with glass — she plans to take a two-week class this summer at the Corning Museum of Glass, in upstate New York, to practice the art of sandblasting. Eventually, she wants to translate her paintings into architectural glass, etching patterns onto its surface and filling the voids with poured paint.