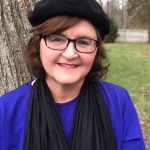 The journey of the writer can be like that of the musician, a tumultuous path where a lack of expectations can lead to a creation that oozes sincerity and creative alchemy. An artist who, having released into the world a piece that someone, somewhere received and consumed, wishes to explore a brush-cloaked trail faces the prospect, if only imagined, of unnerving and irritating the audience he or she worked so hard to attract.

Ramona DeFelice Long couldn’t have been blamed if she’d decided to stick with what first worked for her as a writer — the short story. She has earned Division fellowships for her short stories as an emerging artist in fiction, as an established artist in fiction and as an established artist in creative nonfiction. This year, she earned the Division’s masters grant for fiction, but the short story, this time, was not her vehicle of choice.

Long also has written essays and memoir, and “a year’s worth of creative nonfiction.” She recognizes that each story has its own voice and a proper size. The size that’s right for this project, she learned, is a novel.

Long wanted to write about and for women at midlife, so she created a protagonist who fits that demographic. The character recognizes her own imperfections, a subject Long wished to broach, and is emotionally comfortable, a sense of security that enables her to question the one big question of her life: Why is her mother’s death, tragic and long ago, never talked about? Finding the answer requires her to reconnect with her estranged father, who, like the author’s elderly relatives, doesn’t have decades ahead of him. The protagonist can’t know until she tries whether reaching out will clarify or muddle the past.

The author is employing an episodic structure, “with two separate but related storylines,” Long says, “that weave back and forth to reveal the trauma in a character’s past while she struggles with a minefield in her present, and uncertainty in her future.”

Long, of Newark, isn’t a stereotypically hermetic writer. For years, she has attended and presented at writers’ retreats, conferences and residencies. She actively proselytizes writing when speaking with children. For a time, she ran a Facebook group called “How Many Pages Did You Write Today?”; now she writes every morning at 7 a.m. with other early risers. (“I’m very practical in that I write every day and I want my work to be published,” she says.) Last year, she responded to an appeal by the National Endowment for the Arts to share an arts story for the organization’s 50th anniversary campaign. Long wrote about her daily early writing session, and the NEA crafted a bright red poster with a quote from her.

Long also is a professional developmental editor. She works with authors, often on an ongoing basis, to hone their plots and characters. Many of her clients are published authors who will write a rough draft, send it to Long for review, revise it and then submit it to their publishers. She is, as she puts it, a paid critiquer.

And she has worked hard to build that reputation — Long does a lot of work for the Sisters in Crime, a trade group for authors of mysteries and thrillers. She edits their anthologies. She teaches classes. Her specialization, which she says also includes some women’s fiction, leads to most of her work.

“Running an arts-based business is difficult because it’s a soft industry,” she says, “No one *needs* to write a novel, whereas someone needs to have their house built. But I really approach it like a business. That part of my life, I keep very business-like. I have cards, I go places, I reach out, I really don’t enjoy writing blog posts, but I need to do that for my business.

“My father had a business, and so I learned from him that you have to separate your life. When he would speak to someone about business, even his vocal tone would be different. Maybe I picked up some things.”

Long considers herself a natural short-story writer. She usually can contain an idea and focus. With the story that became a novel, however, she started seeing subplots. As an editor, she’s trained to notice such potential for tangent.

“I began to see at some point that this was not going to be a short story,” Long says. “It was more of a mental leap. It was, OK, this is not a project I will be able to finish in a couple of months, this is going to be a major commitment of my time, which I had never done before.”

The mystery writers whose work she edits often build outlines during the process. Long, who began her project unaware of its eventual format, didn’t outline. So she had to rewrite a lot — “I probably wrote about four novels,” she says — jettisoning entire subplots along the way.

Years ago, in Georgia

-1-
The day my mother got stuck with a needle at work, I’d stayed after school for a student government meeting. A neighbor girl, Patsy, offered me a ride home. Patsy was a senior like my brother Ben, a year older than I was, and she had a car. While she drove, she told me there was a rumor the driver’s ed teacher was having an affair with the principal’s secretary. Patsy was a student aide in the front office so she heard all the gossip. She swore our school was full of fooling around like you would not believe.

At home, my mother’s car was in the driveway though it was only four o’clock. Parked on the street was another car I didn’t recognize, but it had an MD license plate….

But it was her first time working with a novel of her own, and Long was patient with herself as she discovered the process. Without the pressure of a publishing deadline, she allowed the project to become an organic experiment.

The next time she writes a novel, Long says, she’ll be much more organized, likely planning at least the major plot lines. Having exposed herself to challenges of the format, she knows how she can save time and effort next time around.

With this novel, for example, Long at first didn’t recognize that she had a secondary storyline so big that it threatened the main storyline. That fact emerged when she workshopped a draft with her critique group.

“I had to pull away [from the secondary storyline], but it was very difficult,” she says. “I kept the character, but I had to basically remove her entire backstory and put it in a drawer for another time.”

The novel takes place, in part, in contemporary Delaware, in an unnamed town that resembles a Milford or a Magnolia. The protagonist is a teacher with days remaining until she retires. There is a series of bomb threats. One of the characters is a police officer who’s investigating the threats. Long realized, at one point, that she could combine the character with another officer.

It wasn’t a simple choice. She really liked the original cop, so much so that she wrote a character eulogy in a blog post. The officer she had labored to create no longer existed.

“Sometimes you have to do things to characters that they don’t like,” Long says. “When I have a character, I create a whole life for them. It doesn’t appear in the story, but I know it. They become very real people to you.

“You really have to become brutal with what belongs in the story.”

The deletion of characters, for her, is “a longer-form phenomenon.” She knows that in her short stories, she can’t introduce too many characters. She’s learned to make characters handle tasks and plot points that originally might have belonged to entirely different characters — consider it multi-tasking as a plot device.

The Division’s grant will help support Long as she finishes editing her first novel and seeks a publisher. She has two ideas she’s considering for her next novel — one would be about the reasons men stay married, and the other would explore widows. Both would be set in Delaware, which before writing her first novel she rarely chose as a setting; Long’s stories have tended to be set in the South generally, and particularly in Louisiana.

She will lead a free workshop on writing March 20, from 1-4 p.m., at the Kirkwood Library Community Room. One hour will be devoted to creative nonfiction and memoir; one hour to inspiration and the writing hour; and one hour on a question-and-answer session.