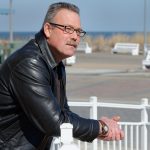 “I have to tell you the truth,” the police sergeant says, “I’m not really a people person. I mean, I don’t like crowds. I don’t like going out. I’m a homebody. But as far as my career or my job is concerned, I enjoy people. I don’t want to just sit in my car. I want to be out, and I want to talk to people, and I don’t mind if people ask me dumb questions. I like to interact with people. I like to have fun with people. But in my personal life, I don’t really want to be around people, and I’m uncomfortable with people.”

April will mark Victor Letonoff’s 14th year with the Rehoboth Beach Police Department, responsible for what in the winter is a small town and in the summer becomes a big city. The place gets so busy that the department each summer has to augment its force with a temporary crew of younger officers.

“What they learn in school is a lot different than what actually happens on the street,” Letonoff says.

This wasn’t his first career choice — that was sculptor, which he spent nine years practicing at Johnson Attelier Technical Institute of Sculpture in Mercerville, N.J., followed by five years at a Rehoboth store he opened.

It wasn’t his second choice — that was commercial fisherman. But the arrival of his children led him to seek a job with a steadier income and benefits.

No Such thing As If

The incident began on Sunday, April 7, 2013, about 4:45 in the afternoon. It was an unusually warm day for that time of year in Rehoboth Beach, making it uncomfortable to wear my ballistic vest, but a great day for young men to walk about shirtless, showing off the tattoos they’d acquired during the long gray winter…

Letonoff was raised in a military family — his father attended West Point — so, he figured, becoming a cop sort of fit with the family history. During the ensuing years, he has experienced enough to fuel his writer’s hand for years to come — the sleepy winters provide a far different setting in which to police than do the thumping summers, when he has to shift his temperament from responding to a carousel of drunken partygoers to guiding a bevy of seasonal officers.

“My great-grandfather built a house down here, on Baltimore Avenue,” he says. “My grandfather was an Army officer. So my mom and my grandmother, my uncles, everybody had a house in Rehoboth. It was the only place that could be called home because every couple years we were stationed someplace, but this was the place that was always constant.”

Letonoff now lives on the other side of Rehoboth Bay. “I need a little isolation,” he says. “I can’t live in the city anymore because it’s too stressful.”

Eight years into his law-enforcement career, he was divorced, an ending on whose beginning he briefly ruminates in “Since I Became a Cop,” which was among his submissions for the Division fellowship: “It probably fell apart long before that but not until it was irreparable did I notice. The funny thing is cops are *supposed* to notice.”

Also in that piece, Letonoff describes the “petite athletic blond woman” he first saw three years later, at a Starbucks “sitting alone banging away on a computer,” and since has married. Her name is Maribeth Fischer, who earned Division fellowships in 2009 (fiction) and 2014 (creative nonfiction).

Fischer says her husband often reads his work at the Rehoboth Beach Writers’ Guild monthly readings and gets a great response. “My feeling,” she says, “is that it’s pretty unique to have a cop who writes and to get the cop side of things.”

Letonoff has had a longstanding love of writing, and he notes that many people don’t realize how much writing cops do, how detailed and precise they must be.

As his wife points out, “Cops are also trained observers, and writers must be this too.”

Letonoff is hoping to publish at least two new pieces this year, and the Division’s grant will allow him some writing time that otherwise might have been spent on special duty. Ultimately, he wants to write a collection of essays about being a cop, a perspective that he believes can use another voice in a national conversation that has grown quite busy.