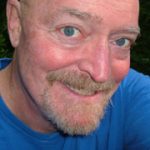 Crabmeat Thompson isn’t quick to adopt technology, but some developments prove too attractive to ignore. These days, he uses computer programs such as Garage Band during his creative process. Inspired at night, he’ll sit at the desk, set up a rhythm track and play his guitar, a beer within reach.

“I could play for weeks and not repeat myself,” says Thompson, of Middletown. “I find it a lot of fun to record like this… I don’t delete much. Most of it has something good in it.”

That preference doesn’t on its surface match the style of his music, which carries on the folk tradition of Peter, Paul and Mary; Joan Baez; and Bob Dylan. When Thompson first heard the genre on Gene Shay’s radio show in Philadelphia, it was, he says, “an astringent wakeup slap after my teen years listening to Dio and the Belmonts’ saccharine love songs. Folk music tells stories of cruelty and death and work – the dirty details of life.”

During the past decade, he has performed in bars from Key West to Dewey Beach, represented Delaware at the Knoxville World’s Fair and toured Alabama, Florida, Kansas, Indiana, Mexico, Ireland, Canada and Spain. (In Florida twice last year, he says, “nobody requested any Jimmy Buffett. I think I’ve turned a corner.”)

Part of his income is from teaching, and he’s fine with that. “I have a lot of life experience to pass on,” he says, “and not all of it fits into a three-minute melodic format.”

He has taught literature and writing at Oregon State, San Francisco State, Western Illinois and Rowan universities, as well as in the Delaware Correctional Center in Smyrna.

The Delaware Division of the Arts fellowship grant has gone toward an 8-track digital converter and will help him buy a MacBook Pro. He’s re-releasing his 1984 debut album, recorded live at The Grand and until now available only on vinyl, and his second album, “Spiritual Beer,” which since its release in the 1990s had been available only on cassette.