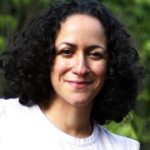 That’s her, standing to the left of the open wooden door. She’s wearing a black V-neck shirt and a white skirt. Her arms are behind her back. Her skin is light.

The photographs Cybèle Clark-Mendes submitted with her application for the Delaware Division of the Arts individual fellowship are from her series “Dichotomies.” Clark-Mendes made self-portraits in which she appears twice—the mirror images are fused at the center of each piece. But the differences in tone—of her skin, her clothing and the setting—are significant.

“Once I had an understanding of how I could apply this method to an image conceptually,” she says, “I then created images that would directly benefit from this doubling of the figure, or mirroring, if you will. As a woman of mixed heritage—my mother is Black and my father is white—the topic of skin color and appearance is at the forefront of my work.”

Clark-Mendes, a Newark-based photographer, draws inspiration largely from her youth. Her parents split up when she was 4. It was a critical experience. Clark-Mendes stayed with her mother; her two older sisters and older brother lived with her father.

Six years passed before she again saw her father and siblings.

“I’ve made work about this separation and reunion on more than one occasion,” says Clark-Mendes, 34. “But as a whole, aspects of my childhood, family dynamics and racial identity have contributed the great wellspring of ideas that I’ve drawn from for many, many years.”

She began “Dichotomies” while a resident artist at the Weir Farm Art Center in Wilton, Conn. Much of her artwork is self-portraiture, so it made sense to continue to explore the subject, which was born of experimentation.

“The environment of the Weir Farm played a major role in this work,” she says. “It was as much of an actor as I was. So, I would say that the location directly influenced and inspired the work. There was a natural yet distinctly old and historical feeling to the location.”

Clark-Mendes plans to put the Delaware Division of the Arts grant toward delving further into the notion of dichotomy.

“In this world,” she says, “we need to categorize, we need order and logic, so I figure that looking at life in pairs and sets of two makes a great deal of sense to me. As I work on this project, the idea will essentially form itself, narrowing the scope and the specificity.”

The fellowship, she says, “is hugely important to me. All artists experience a great deal of rejection, from exhibition proposals, galleries, and of course by grant applications. So, this award demonstrates outside recognition and a great dose of encouragement.”