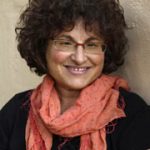 About four years ago, watching her son peck at his cell phone’s keypad, the thought first struck Felise Luchansky: There must have been another time when people communicated in another way but used a form of shorthand.

She went online, trolled around and found the seed of an idea that would become her next project: Morse code.

She created paper collages on wood panels, each of them a dot or a dash 1 foot tall, spelling “D-E-S-I-R-E” and spanning 24 feet of wall space over two walls.

“When I saw this kid going miles a minute, texting on the telephone, I said, ‘This is revolutionary.’ I’m really interested in the way people connect and communicate.”

Each dot is 8 inches in diameter. Dashes are 24 inches wide. Each character is separated by 8 inches of space, each letter by 24.

Luchansky, 52, chose the word “desire” because “it’s pretty weighty and provocative. She’s expanding the project, which is at the Delaware Center for the Contemporary Arts, to the third and fourth walls. She plans to illustrate a word that has something to do with touch.

Her Delaware Division of the Arts grant, she says, will go toward a new printer and studio rent, among other things. She’d also like to enroll in a workshop in which digital and hand printing are combined.

Luchansky, of Wilmington, began cutting images and lettering out of Life magazine when she was in the sixth grade. It was her first step in working with collages.

“It’s always been there,” she says, “this idea to cut and paste and to rearrange.”

In 1967, during the Vietnam War, Luchansky would cut out the photographs in Life soon after its arrival in the mailbox. Her parents oftentimes hadn’t yet leafed through its pages.

From college on, she collected and organized (often by color) a range of ephemera that continues to prove useful.

Photography and printmaking were her focus early in her career, but she missed the tactile elements of her more youthful creativity, and Luchansky returned to cutting and pasting.

“I’m always reactive to whatever is happening in my personal life or the world at large,” she says.

And so it was with “D-E-S-I-R-E,” rooted in her observation of her son texting and connected to an antiquated shorthand that, it turns out, isn’t quite so antique.

“And now it’s like the hottest thing,” she says of Morse code. “There’s even a bank that’s using Morse code as their ad campaign.”