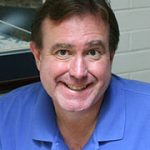 When Larry Anderson graduated from the American Academy of Art of Chicago, he knew how to draw and paint. Marketing and self-promotion, however, weren’t yet part of his skill set.

So he took a job at his father’s engineering company.

“I basically thought my talent was a curse,” he says.

When the construction industry took a hit 17 years later, Anderson turned to painting to help him pay his bills.

He took his first nine paintings to a gallery. Its managers said they didn’t buy original art. But they had a look anyway, and 20 minutes later he left with $900 for his paintings.

During the 15 years since, he has made his living with watercolors and a brush. The Mid-Atlantic region has become his muse for scenes that reflect a reality reimagined.

“I’m originally from Chicago, and what I’m painting is people’s Delaware, Pennsylvania, Maryland and D.C. memories,” Anderson says. “Almost to the point that I feel like I’ve lived them by the time I’m done painting them.

“I can do a street scene from 1960 and actually go down 50 years later and walk and see what I’ve painted, not see what’s actually there, which can be sort of scary sometimes.”

He uses watercolor, he says, because it dries quickly, allowing him to work from right to left. It’s also “just what I’m used to.”

“I’ve been wanting to try oil,” Anderson says, “but my schedule doesn’t allow me a whole lot of time to practice something new. That, and I never cared for the smell.”

He works from photographs he takes throughout the region. (For the Delaware Division of the Arts fellowship, he submitted paintings of Delaware scenes within a 50-mile radius.) After shooting more than 200 photos, he says, he might have one he considers workable. From that, he determines which mood would best suit the image. (A black-and-white study of the photo helps him find a mood.)

When Anderson, 54, takes aerial pictures from a helicopter, he uses both a digital and a film camera, “just in case.” Film, he says, sometimes seems to produce richer colors.

Computers, however, have become entrenched in his creative process.

“I work on a drafting board,” the Wilmington resident says. “I still use my engineer’s scales. I still use my triangles and T-squares. It’s mathematical. Art is math.”

So Anderson ensures, for example, that the size of bricks correlates with the building.

And he says he scrapes paint from bricks to see the colors that marked certain periods. He retrieves the color chips of specific models of cars depicted in his paintings. Anderson takes the most pride in his perspective, but accuracy is his primary concern.

“If there is something historically wrong with my paintings,” he says, “people will point it out.”

His grant will help him update his website and buy a new computer. He also plans to help “fledglings” next year apply for the fellowships.