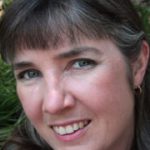 When Heather Siple was a girl, she says, concepts appeared as glowing balls she could rotate in her mind, examining them as if spinning a globe.

Among the full-time mother of two’s latest artistic passions is her use of a home-built lens coupled with a traditional lens to create, as the Wilmington resident says, “floating spheres in space.”

“Fifteen dollars’ worth of hardware-store glass on what was originally a thousand-dollar camera,” says Siple, 38. “It’s just a matter of poking around the hardware store and finding something that’ll bend the light to 180 degrees.”

The photographs she submitted in earning her fellowship are gelatin silver prints – 14-by-14-inch squares of black, each centered by what alternately could be described as a glowing orb or a fish-eye view from the perspective of an insect.

People who have looked at her work have asked whether Siple had photographed, say, a Victorian gazing ball, or a door’s peephole, or a crystal ball.

Siple’s father and grandfather were photographers. Until about 10 years ago, she was still using her grandfather’s enlarger.

“The great value is in playing in the darkroom and thinking back to when my dad and I would sit in the bathroom together – we would use the bathroom sink and the bathtub for washing prints, set the enlarger on the toilet,” she says. “I’ve always been a photographer. I got my first 110[mm] camera when I was in elementary school. Before that I had a Fisher Price toy thing that had a slide viewer on one side and a little viewfinder for looking at the rest of the world on the other side. And I never looked at the slide viewer. I was always looking through the viewfinder. I was always pretending to save whatever I was looking at, pressing an imaginary button.”

The grant has helped her to build a stock of developing paper, a growing concern as paper companies close, and to purchase spare parts for her cameras. Most of it, however, has gone toward producing a book, “Through the Crystal Ball,” that will be released at her fellowship show in June.