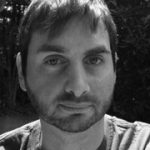 You might look at one of Ashley John Pigford’s kinetic sculptures and feel intimidated by the metal and wires and switches, but take heart – the artist wants you to take that feeling, cast it aside for a moment, and play.

“I take my work seriously,” he says, “but I don’t take it too seriously. One of the best comments that somebody made about one of my pieces was that their child loved it. And that’s just the best thing in the world for me. That’s part of why I love teaching.

“I just think that any time you can engage an adult or just another human being in that feeling of play, true humanity comes out. All of the other stresses just dissolve.”

His paintbrush is a soldering iron, or sometimes a power drill. His goal is to reposition or reuse obsolete technology and consumer electronics to create a different experience. So it is with “28,770 Megabytes,” for instance, which lines up a grid of world-weary hard drives and sets them spinning with the flick of a switch. Red, white and black wires are fastened to an exposed panel as they send electric life to the disks.

“Things that spin are just interesting,” says Pigford, of Newark. “Those personal inspirations became the basis of my work.”

Pigford, 36, is an assistant professor of art and design in the visual communications program at the University of Delaware. He spent about 15 years in commercial graphic design, much of that in Los Angeles running a design business. He and his wife examined their lives and decided to leave the West Coast so he could attend graduate school at the Rhode Island School of Design.

While there, Pigford began to look for personal interests rather than commercial interests as inspiration for his work. He revisited his childhood desire to take apart electronics.

The element of play is integral to his work, both in the process and in the final product.

“It’s really about responding to technology in our lives,” Pigford says. “Things like clock radios, computer hard drives, doorbells – things like that – and remaking that into a different type of experience, which therefore poses questions about that technology and its role in our lives.”

The Delaware Division of the Arts fellowship grant will help him pay for studio space and electronics components that aren’t easily found in thrift stores or reclaimed from computer recycling bins.