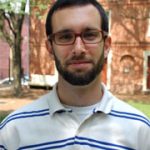 For the past six years, Michael Kalmbach has explored Dura-Lar Clear, a plastic film that grabbed the painter’s interest to the point that he considers his cumulative work a material study.

He was interested in how it might handle acrylic, and he soon found the answer: The flat, saturated surface reminds him of vehicular clear-coat finishes and flat-screen TVs.

Kalmbach, a 29-year-old Newark resident, is as experimental as a scientist.

“What ultimately will get me stuck on one idea and creating multiple variations of that one idea is focusing in on an effect that changed the work,” he says. “I think that oftentimes I’ll compare this type of working to music, or in particular, the hip-hop and the Beat generations, where something happens that you’ve never really seen before. And when that happens in my studio, I try to see how much I can control those things that first happened by accident.”

In this latest method, Kalmbach pours acrylic onto the plastic and lets gravity move the paint atop the material. Random lines and forms emerge. He paints strands of dots that appear as, say, a woven tail, or a wave, aura or explosion. Sometimes they encircle the nebulous lake of colors; sometimes they direct the fluid acrylic that passes through them.

“I have only been able to access the sublime through chemicals,” Kalmbach says.

The materials he uses, he says, satisfy his artistic urges. He doesn’t think about an audience while creating piece – “Art,” he says, “ultimately needs to be radically free of any constraints” – and he is skeptical about people “who think they may be curing cancer with their work.”

Once painted, the Dura-Lar film is wrapped over a fabric background, creating a highly reflective surface that is similar to the resin-coated works of Fred Tomaselli.

Kalmbach, in other words, tries to maintain a visceral, direct view of what he does with paint.

The grant has allowed him to restock his materials. That’s invaluable for an artist who has no qualms about saying he makes “a lot of bad stuff” before finding what works.