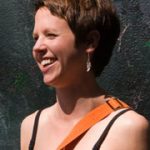 Hunter Clarke likes how cultures throughout the world and through the ages have used animals as symbols in fables, so it’s no stretch to understand what she’s working toward with her paintings.

The Ardencroft resident says she often thinks about predators and what their survival necessitates.

“They are quiet and unashamed of their need to hunt and kill other animals to eat,” says Clarke, 32. “There is no malice of evil within their nature, and why should there be? Without this cycle of becoming part of another, there would be nothing.”

Clarke likes to combine abstraction and realistic imagery. So in her work you’ll see, for example, three dogs clustered atop fallen prey, shoving each other with their heads as they jockey for the next chunk of fur and flesh. But the background, in this case, features a large blue rectangle anchored on the top-left; yellow fills the frame and is marked with various faded shapes.

The eyes of animals in the midst of a meal, she says, “are very calm and collected, like we’re eating a chicken. It may seem to be shocking, but it’s actually quite normal.”

But Clarke’s interest in animals isn’t entirely of the wild kind—her 11-year-old cat is called Sangha, a Buddhist term that means community of people searching for enlightenment. She named her daughter, born earlier this year, Sora—it means “chirping songbird.”

She likes her work to generate stories in viewers’ minds. Fairy tales and archetypes intrigue her, and she likes the idea of people connecting her work with stories of which a painting might remind them.

Clarke’s Delaware Division of the Arts fellowship grant went toward improving her studio, a freestanding garage on her property. She installed a 6-foot window, and improved the lighting, so integral to the painting process.