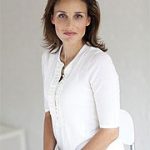 Six years after college, L.J. Sysko was hit by post-partum depression. Her husband suggested she return to poetry, her academic and creative passion.

She e-mailed Lee Upton, a poet and former professor of hers, for advice. He directed her to the program in which Gerald Stern, a poet she admires, participated at New England College.

“That’s as close to a seminal moment as I have,” she says. “It was a rescue personally and artistically.”

In high school, she says, “I read poetry that seemed to grant itself, and by extension, all of us, permission to be real, physical, and contemporary beings—Wilbur’s ‘Playboy,’ Bishop’s ‘Shampoo,’ Roethke’s ‘My Papa’s Waltz.'”

Here we all are, in the bathroom together
like huddled fishermen atop a frozen lake.
Rosy-cheeked, enlivened, small beneath the tent of night.
Even the pets watch, the cat from the sink, the dog from the doorway.
It’s as if they think we’ll leave them—

Tonight: windows closed, nightlights on,
the bluster’s come, chilled the marble tiles—
he pokes her bellybutton, she laughs, then,
grooms him, draping the wet washcloth across his back.
She smoothes his hair into spiky tufts, then is struck with giggles

when he turns from the rushing spigot to smile, toothless.
They’re storybook monsters, fierce and blithe.
Pennies in a fountain, wishing, blazing. I wash their hair,
rinsing carefully, first one head, then the other. Constellations
swirl before me, then float light-years away.

“I had no idea before that day in school that one could write and had written, for that matter, a poem about domestic and essential things. I thought poems were required to be classical—about mythological figures full of allusions for which one might not have cultural references necessarily.”

At Lafayette College, she entered two contests and won both. She had been encouraged by Upton, who was her creative writing professor during her sophomore year. One of the contests was judged by Stern.

Sysko’s grant from the Delaware Division of the Arts came by way of a book-length manuscript of her poems. Titled “Spider Goat,” the poems were born from 2004 through, she says, “well, five minutes ago. The truth is that ‘finished’ is a relative word when it comes to writing.”

The collection carries a theme—she wrote the poems in response to post-partum depression, suburban motherhood and identity. She calls them “scrawls on the sand made by a marooned woman—from the rocking chair at 3 a.m. with a newborn to the door closing when her husband goes away on business. The home becomes a center, an anchor, a lens through which she sees.”

Her work is intimate. She shies away from no imagery. But the confrontation, she says, “is mediated—those decisions for pacing, irony, and humor all fascinate me. My day or the mood of my day may hinge on one successful hinge point in a poem.

“Happiness is that ephemeral sense of achievement and pride. Then something else happens and the moment moves on, but it happened and so it can happen again even thought it’s difficult, or maybe because it’s difficult, it’s worth doing.”

When you look out of a window,
square and sad some day in the future—

because we know sadness visits
every house—

think about these circles instead:
the one we make as a group

today to witness you give
rings to each other, making

the promise that you will,
your mouths, your lips

forming circles as you say
I do, champagne glass rims,

the circle of a garter, blue,
round layers of cake,

and there is no end in a circle,
we know, we see, what we smell

from childhood, something baking,
mother’s perfume, a Christmas tree,

swirls in our minds, round and round
from birth to death with marriage

like a shining diamond in the middle.
So remember this day and what you

promised—to be his hero, if you can,
in small ways like bubbles in a beer,

like a dollop of cream on his coffee,
every day, and the little circles

like the doorknob turning
each night and saying, honey,

now and today
and forever, I am home.

The grant will allow her to enroll in a weeklong master class in Lincoln, Neb., hosted by the literary journal Prairie Schooner. There she will work on her manuscript, which she says feels finished, “a feeling that can be, from what I have noticed, an untrustworthy sensation.”

Afterward, she’ll explore her next project, which counter to the autobiographical nature of “Spider Goat” will abandon some of that commitment to biographical truth.