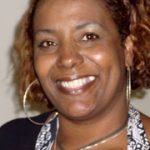 She paints from the perspective of a child, with broad strokes and bright colors. The scenes almost universally are set in the Louisiana bayou, the home of her early youth and, really, of her spirit.

Nina Spencer finds inspiration in moments others might consider mundane – she recalls the adults of Marksville, La., washing clothes outdoors or harvesting crops, the children playing or fishing or splashing in the swimming hole.

But in those moments, so small yet so universal for those who shared her upbringing, Spencer finds solace.

Her dialectical writing and her singing complement her folk paintings, most often rendered with acrylic on tile. But painting is what has brought her the most attention.

She likes smooth surfaces – naturally tumbled rocks and black skillets, for instance – and friends during her youth sometimes would give her the shiny black pans used for deep-dish pizza at a pizzeria that was next to a gallery she frequented.

In elementary school, she used cardboard boxes to build dollhouses and miniature pieces of furniture. In the first grade, an assignment to write and illustrate a book got her on the news in Houston, Texas, where she was living at the time. (Her father is a Baptist preacher and had a congregation there.)

Spencer, of Dover, considers herself to be very spiritual but not religious. She peppers her conversations with references to a Creator – “The vibrations of that word, I know it’s colorful,” she says. “I know it’s universal.”

“I will dream or see the picture before I paint it,” says Spencer, 46. “I’m just the instrument. I’m just a vessel.”

Her fellowship exhibition, “The Stroke of Genius: An Evening with Nina,” will be hosted June 11-12 at the Dover Art League.