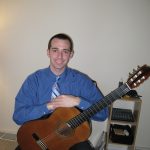 Half of the bands on Michael Sterling Smith’s playlist, at any given moment, would surprise people who have listened to his own music. He’s proud of his eclectic tastes—Stravinsky, jazz, pop and heavy metal carry equal weight.

Smith is a guitarist and composer whose style is far from conventional.

“My music,” says Smith, 26, “I guess it doesn’t use too much traditional harmony, although some of my pieces do. It’s more counterpoint than harmonically based.”

When developing a piece, he begins with a mood—melancholy or playful, for example—and starts writing with a small rhythm or melody. Sometimes, that’s the basis for the whole piece.

“To me,” he says, “it’s sort of like figuring out a puzzle, trying to move the notes around, the rhythms around, so I can get down how it sounds in my mind.”

For “The Worm Turns,” part of his submission for the Delaware Division of the Arts individual fellowship, he started with an obscure chord he liked and based much of the piece on it.

Performing his own work, he says, is difficult—he’s used to interpreting others’ compositions, and inventing a sound is an entirely different endeavor.

Ultimately, Smith would like to expand his work to include performance, composition and teaching.

The grant allowed him more room to grow as a composer. He used the funds to replace his laptop, upgrade his music software and buy a laser printer. It also will help pay for the hall rental and musicians for his fellowship concert, for which he already has booked Gore Recital Hall at the University of Delaware at 5 p.m. Oct. 24.

He has penned a 10-minute, three-movement guitar-and-flute piece. He’s written two movements of a guitar duet and is considering a third. He intends to write a solo guitar piece, as well. In all, the concert might fill 45 minutes with Smith’s unique sounds.